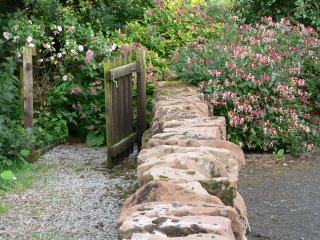 8th July: Overheard at the airport; seconds before we reach the meet-and-greet area.
9th July: Reading Scotland on Sunday I wonder when we started using the word "project", as in "Zidane was brought up on a tough housing project in Marseille". What's wrong with scheme? Later, reading Allan Bennett’s Letters Home, I wonder when we stopped using the word precinct, as in "shopping precinct".

12th July: On hearing a reporter on Channel 4 news announce that "of course, there are less people on the roads today", I resolve that I will no longer mark this as a grammar mistake in student writing. Il ne faut point être plus royaliste que le roi.

16th July: Back in France to temperatures of 39°C, which is about the temperature Z was running for most of the journey home.
at July 17, 2006 9 comments:

This is fun (read, this keeps you occupied when you're stuck at home trying not to unpack anything more than a toothbrush). Feed some text into the Dialectizer, choose your dialect and admire the result. I chose cockney.


A couple of monffs ago, EADS announced out of the blue that it were quite simply layin' off 1050 workers in Sogerma, its aircraft maintenance company in Bordeaux. Despite much posturin' by the PM and universal outcry in France, no buyer 'as yet been found and no announcement 'as been made. I 'ave evry sympaffy wiv the workers, I right do, right, but today I'm bloody well sympathisin' frough gritted teeff. This mornin', about 300 workers from Sogerma occupied the runway at Mérignac airport, right, just as the kids and I were about ter go frough ter the bloody departure lounge and cop on a Bmibaby flight. The demonstration only lasted about an 'our and we were quite quickly told the bleedin' airport were operational again. Wen we got the bloomin' the chuffin' security check, however, it turned out that us flight ter Manchester 'ad, in fact, been cancelled. The incomin' flight 'ad been diverted ter Toulouse, and for some reason Bmibaby weren't bringing the bleedin' aircraft hammer and tack up ter Bordeaux. Oh, happy day. After a rush ter the bleedin' information desk, jostlin' ter get the Bmibaby dog and bone number, and a quick call on me mobile, I turned dahn a flight ter Birmingham this afternoon (too far ter drive) but managed ter get us on tomorrow's flight ter Manchester, right? Tears streamed dahn the bloomin' children's faces as they realised they wouldn't be seein' Grandma this afternoon after all. These situations right brin' out the worst in some stewpid blokes, init?Instead of concentratin' on wot the possibilities were and just copping on wiv it, right, one tart couldn't resist shriekin' in English at the poor girl 'oo were doin' 'er Mae West to organise blokes and give out the bloomin' information, that this were "just typical of France." "No, right, Madame" said the girl, "it's not France, it's Bmibaby". "Yes, but it's yor strike! Struth! It's France's fault!" I resisted the urge ter slap 'er. Eventually, right, we unchecked us luggage and got a taxi 'ome ter the house we 'ad left a couple of 'ours earlier.

Nailed to the ground

A couple of months ago, EADS announced out of the blue that it was quite simply laying off 1050 workers in Sogerma, its aircraft maintenance company in Bordeaux. Despite much posturing by the PM and universal outcry in France, no buyer has yet been found and no announcement has been made. I have every sympathy with the workers, I really do, but today I am sympathizing through gritted teeth.
This morning, about 300 workers from Sogerma occupied the runway at Mérignac airport, just as the kids and I were about to go through to the departure lounge and get on a Bmibaby flight. The demonstration only lasted about an hour and we were quite quickly told the airport was operational again.
When we got the security check, however, it turned out that our flight to Manchester had, in fact, been cancelled. The incoming flight had been diverted to Toulouse, and for some reason Bmibaby wasn't bringing the aircraft back up to Bordeaux. Oh, happy day.
After a rush to the information desk, jostling to get the Bmibaby phone number, and a quick call on my mobile, I turned down a flight to Birmingham this afternoon (too far to drive) but managed to get us on tomorrow's flight to Manchester. Tears streamed down the children's faces as they realised they wouldn't be seeing Grandma this afternoon after all.
These situations really bring out the worst in some stupid people. Instead of concentrating on what the possibilities were and just getting on with it, one woman couldn't resist shrieking in English at the poor girl who was doing her best to organise people and give out the information, that this was "just typical of France." "No, Madame" said the girl, "it's not France, it's Bmibaby". "Yes, but it's your strike! It's France's fault!" I resisted the urge to slap her.
Eventually, we unchecked our luggage and got a taxi home to the house we had left a couple of hours earlier.
at July 07, 2006 2 comments:

First of all I had to sit a wee test to make sure I could translate football parlance from French into English. I seem to remember that there were some really tricky terms such as "le football", "dribbler", "le goal", "les supporters", and "une pénaltie" but I came with the goods and they gave me the job. It then turned out that my post didn’t involve any actual translating, I was, in fact, to be paid quite handsomely for simply checking the translations of volunteer workers before they were published on the internet. (Did you know that the World Cup functions with people who aren't actually paid anything while the big wigs rake it in?)

I got off to a bit of a bad start during the training day. We learned that the volunteer translators were going to be translating short articles written by volunteer reporters. These novice reporters would get their material by going out to the training grounds in the morning, observing the training sessions and trying to elicit some pithy remarks from the players.

It suddenly dawned on me that we were expected to translate quotes that had already been translated from English into French back into English. So I raised the question of about how we would get access to the original quotes, otherwise, I argued, it was going to be more like Chinese whispers than journalism.

Head of Press Office (or Pompous Incompetent Git, hereafter PIG) : You won’t have access to the original quotes, the volunter reporters will have taken notes in French.
Me : But do they speak any language other than French ?
The volunteer reporters all suddenly find the floor fascinating.
PIG : They get by.
Me : So if a player gives them a soundbite, they’ll quickly write whatever they think they understood down in French, and then include it in their report.
PIG : Yes
Me [jaw dropping] : but then when we translate anything in the quotation words back into English we won’t be using the original words.
PIG : You don’t really believe [drip of sarcasm falls to floor] that everything you read between inverted commas in the newspapers [sneer] is an actual word-for-word quote do you [lip curls]?
Me : Er, y…es.
Press room full of volunteer reporters sniggers.

Although I worked with PIG for the next month, that was the last time I ever spoke to him and I simply made sure that any direct speech in the translations I checked was systematically changed to reported speech.
at July 05, 2006 3 comments: 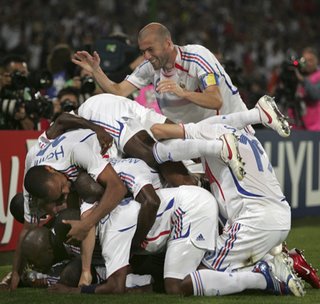 France is in the grip of football fever. The tournament started out quite sedately with nobody here really believing in the team’s chances this time round: Zizou seemed to be getting old, Domenech looked like a tired actor in a commercial for pseudo-trendy eyewear and then there was the Djibril Cisse bendy tibia incident in the final friendly (I wonder if that boy's drinking enough milk). After a lacklustre qualifying round, however, things really started to hot up when France beat Spain in the "huitièmes de finale". By this time my friend Sue who was celebrating her 40th the following Saturday, was praying for them to lose (it’s my party and I’ll ban football if I want to, football if I want to). In the end, a TV screen set up just inside the French windows meant that we were all able to mingle and drink and cheer and nibble (did I mention cheer ?) on the terrasse all at the same time, and then we moved inside for the drunken chanting.
So now they are in the semis (see the reaction in the centre of Bordeaux here) and for me it’s all very reminiscent of 1998 really. With three minor differences:

1. Scotland isn’t involved
2. There are no matches in Bordeaux
3. I’m not working in the FIFA press centre

Eight years ago, Bordeaux was invaded by the genial tartan army. The Bordelais discovered how wonderful the Scots are (absolutely everyone seemed to have a story about a Scot they’d met and taken home or about evenings they’d spent partying with men in skirts) and the English residents discovered that, shock horror, Scots don’t actually support the England football team, as many of the "traditional folk songs" being yelled throughout the city testified. The bars all ran out of beer but there was no loutishness. Further south in Toulouse where Engerland were playing, it was a different story.
We partied at night along with the best of them (ah, those footloose pre-baby days, sigh) and during the day I worked as a translator at the press centre.
To be continued ........
at July 04, 2006 3 comments: