I have had a really stressful week. No really, I have, I'll tell you all about it some time. This evening, then, I was more than ready for my yoga class. It's one of those kundalini classes where you do a bit of exercise, then a bit of relaxation and finally a bit of meditation. It goes without saying that the best bit by far is the relaxation phase when you get to lie down on your mat and pull a blanket over yourself for a full twenty minutes.

I have absolutely no difficulty in falling asleep in public places. I may spend half my nights tossing and turning, reading on the kindle app on my phone, falling asleep again, waking up again, staring at the ceiling, tweeting about staring at the ceiling, but when the yoga teacher puts on that sitar music and turns the lights down low I'm asleep within about five seconds. "Feel your whole body connect with the ground, feel your legs ....." he intones, and I'm in the land of nod before he even gets to our knees. It's a lovely, lovely sleep but it is over all too quickly and then the boring meditation bit begins with uncomfortable mudras and mantras that I just cannot get my head round.

The only problem with the relaxation phase is that I know that I snore. You're shocked, I know —how could a dainty thing like myself possibly snore? However, I am told on very good authority at home that I actually snore quite loudly, perhaps even very loudly. When the relaxation is over, I have a quick shifty to see if anyone on the mats around me is staring, but of course they're all too polite to do that. I suppose I could ask outright if I had been snoring, but what if they said yes and that the racket was actually quite unpleasant and distracting for them? I'd be far too embarrassed to ever go back. No, ignorance is bliss. Sat nam.

On the second day that we had the car, we set off a little more nervously than the first day. We decided to drive up the Atlantic coast. P. was a little more wary about driving since he now had experience of being gaily overtaken on the inside, of flocks of sheep being shepherded across dual carriageways and of motorbikes with trailers laden down with enormous piles of grass weaving blindly through the traffic. We would have liked to visit Essaouira because so many people had told us good things about it, however it was just a bit too far. So we made do with Taghazout, a village on a magnificent beach adored by surfers and aging hippies. We stopped the car by the roadside to have a look at the panorama and a guy immediately jumped out of the bushes (that's how it felt anyway) and asked for parking money. We ignored him. 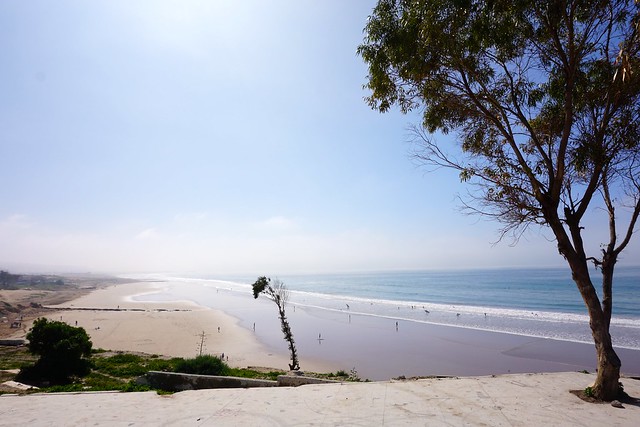 It was a lovely place. We ended up staying for lunch. Z had a pizza, which is what he had for lunch every single day we were in Morocco. It has to be said that the food in the hotel was pretty poor. The things that had been unpopular one evening (fish loaf made with sardines for example) turned up in a slightly different guise the following evening (deep fried slices of fish loaf). The dates were good though, as was the freshly squeezed orange juice. We quickly discovered that if we left wine in our bottle for the following evening, it came back with a good inch or two missing. But what could we do? Accuse the waiters in a Muslim country of drinking our Guerrouane Rouge? We switched to half bottles. 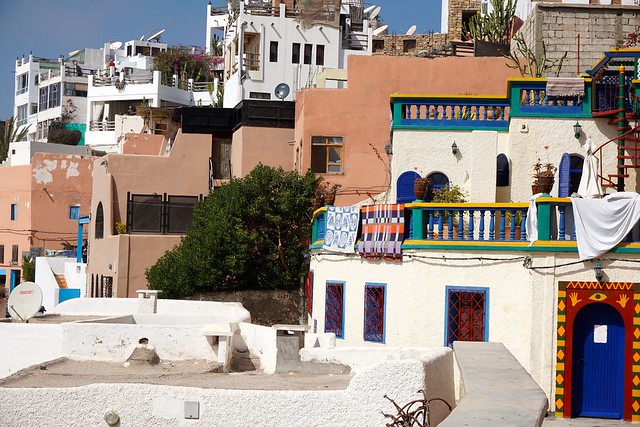 On Thursday we went to the fishing port. A man with the most amazing glasses latched on to us as we were walking in. They were wire-framed and round but the lenses were so thick that you couldn't actually see his eyes. "Je suis pêcheur" he said. The motor on his boat had conveniently broken down which is why he wouldn't mind being our guide. We followed him around the port and the boat-yard and the ice factory listening half-heartedly to his explanations about the fish landed and the boatbuilding materials. The port was really quite an impressive sight - hundreds and hundreds of men swarmed over the quays selling really quite paltry quantities of sardines and anchovies. And all the while I worried again about how much money we should give him. Inevitably he asked for the equivalent of a week's wages, and we gave him a quarter of that so probably far too much. He slipped back onto the crowd of fishermen his glasses glinting in the sun. 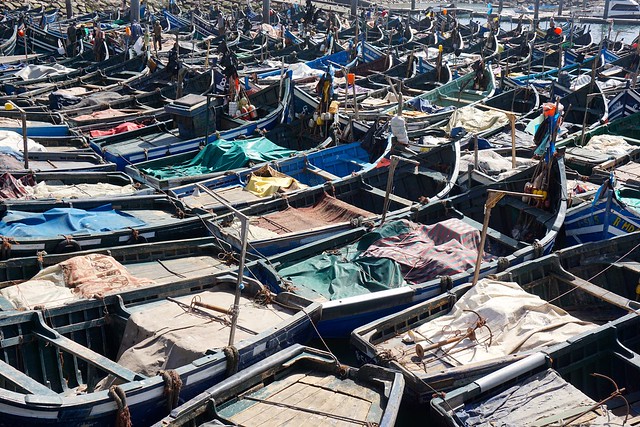 Souk-el-Had means the Sunday souk but it's open every day so we went there on Friday. We went expecting the worst, having been warned to negotiate the taxi fare before we went and to ask to be dropped off at a nearby hotel rather than the souk since otherwise we would be delivered straight to the taxi-driver's fake-guide friends. In the end we walked all the way there through some really bustling quartiers. Once inside the souk we sauntered through airy alleys of furniture and pottery and clothes and shoes and spices and fruit and vegetables and herbs and potions and we weren't hassled at all. All in all, it was a much better experience than the souks in either Tunis or Istanbul. Z bought a fake Arsenal shirt and we bartered a little in a light-hearted way. 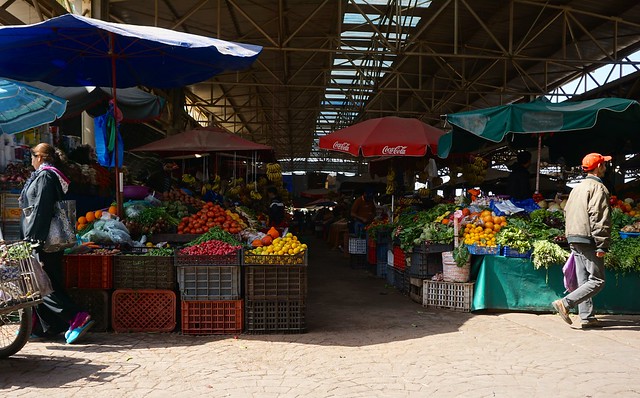 If you want to see the fantastic view from the casbah which overlooks Agadir, one of the only buildings not destroyed in the earthquake, you'll have to Google it I'm afraid. We never made it up there since it was a bit hazy and we didn't think it would be worth it, and I was a bit anxious about what the difference was between the little orange taxis and the big green taxis and how we would negotiate the price and make sure the taxi waited for us. I had definitely settled into wary tourist mode. 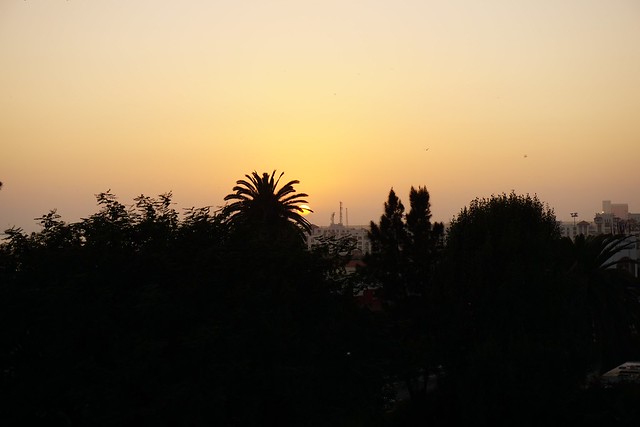 That night we set the alarm for 2.30 a.m. for our flight back to Toulouse which to everyone's great relief went without a hitch. I don't think that our next holiday will be in Morocco but it was certainly an interesting experience and it's always pleasant to think that you've pulled a fast one on winter by stealing a bit of sun and the whiff of orange blossom. In the end, we're all on the make.
at March 03, 2015 4 comments:

A week in Morocco

This was one of those last-minute holidays. We knew we wanted some winter sun so I looked at all the cheapest last-minute deals possible in places where the temperature was above 25°C. The South of Morocco came out on top for both cheapness and warmth so off the four of us went to Agadir. 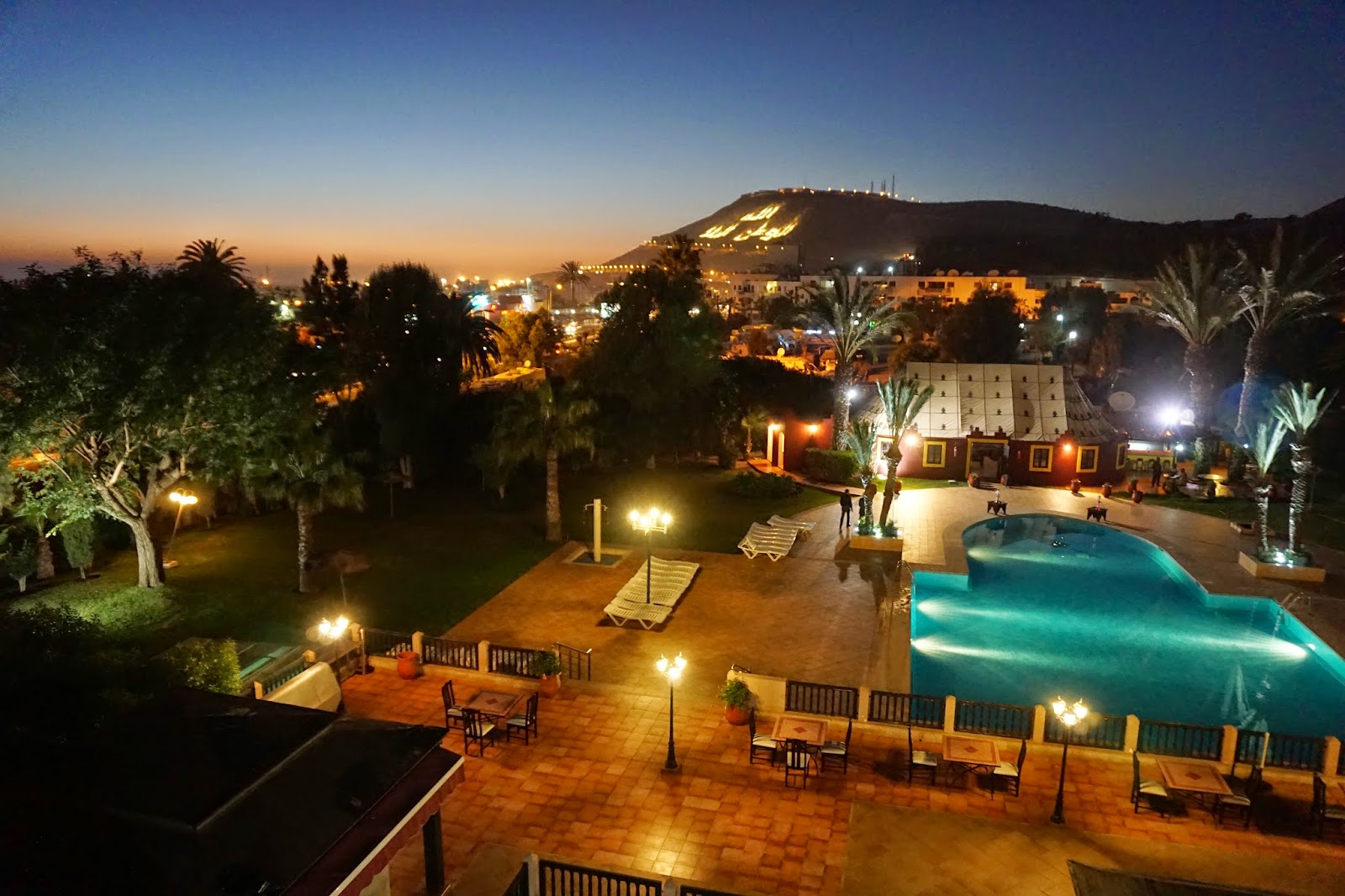 We were flying out of Toulouse, Bordeaux being much more expensive because of school holiday dates. We got there in plenty of time for our 1 p.m. flight, grabbed a quick sandwich and went through security. Little did we know that we would still be there twelve hours later and that in all that time, since we had no access to shops or restaurants, we would have ingurgitated no more than the one sandwich, the measly packet of crisps and the tiny bottle of water the airline gave us. (I'm not naming the airline for the moment because I've applied for compensation and I don't want to jeopardise our chances). A combination of snow in Lyon from whence our plane had arrived (late) and some sort of technical hitch with the "flaps" meant that we had to wait for them to bring in a replacement plane from Liège in Belgium. It didn't arrive until almost one in the morning. By this time one couple had left with their tiny baby forfeiting their holiday because they simply didn't have enough formula with them to last through the night (breast is best people); a couple of respectable-looking women had had a fist fight over access to an electrical socket to recharge a mobile phone; another woman had collapsed; and a crowd of crazy passengers were shouting at the police demanding they "do something". Fun times! 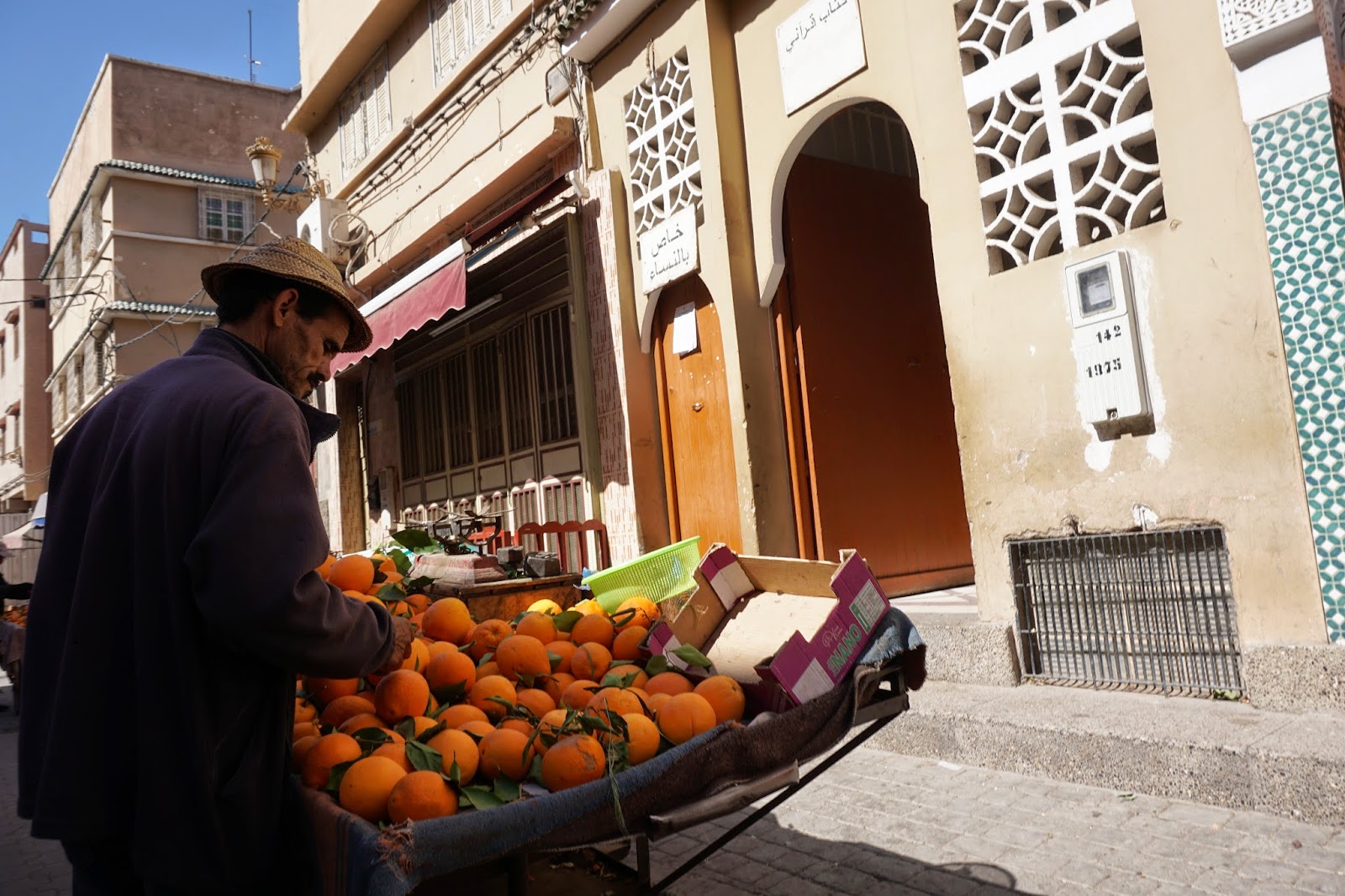 We eventually got to our hotel in Agadir at well past 3 a.m. local time, 4 a.m. for out tired and weary body clocks. We were shown to two frankly mediocre rooms looking over a building site, and promptly fell into bed. Just as we were falling off to sleep, the telephone rang, and there was a knocking at the door. The kind night porter had found better rooms for us at the back of the hotel overlooking the pool. So we got up again and trundled through the corridors in our pyjamas, and fell into the beds in our new communicating rooms. By this time it was almost light. 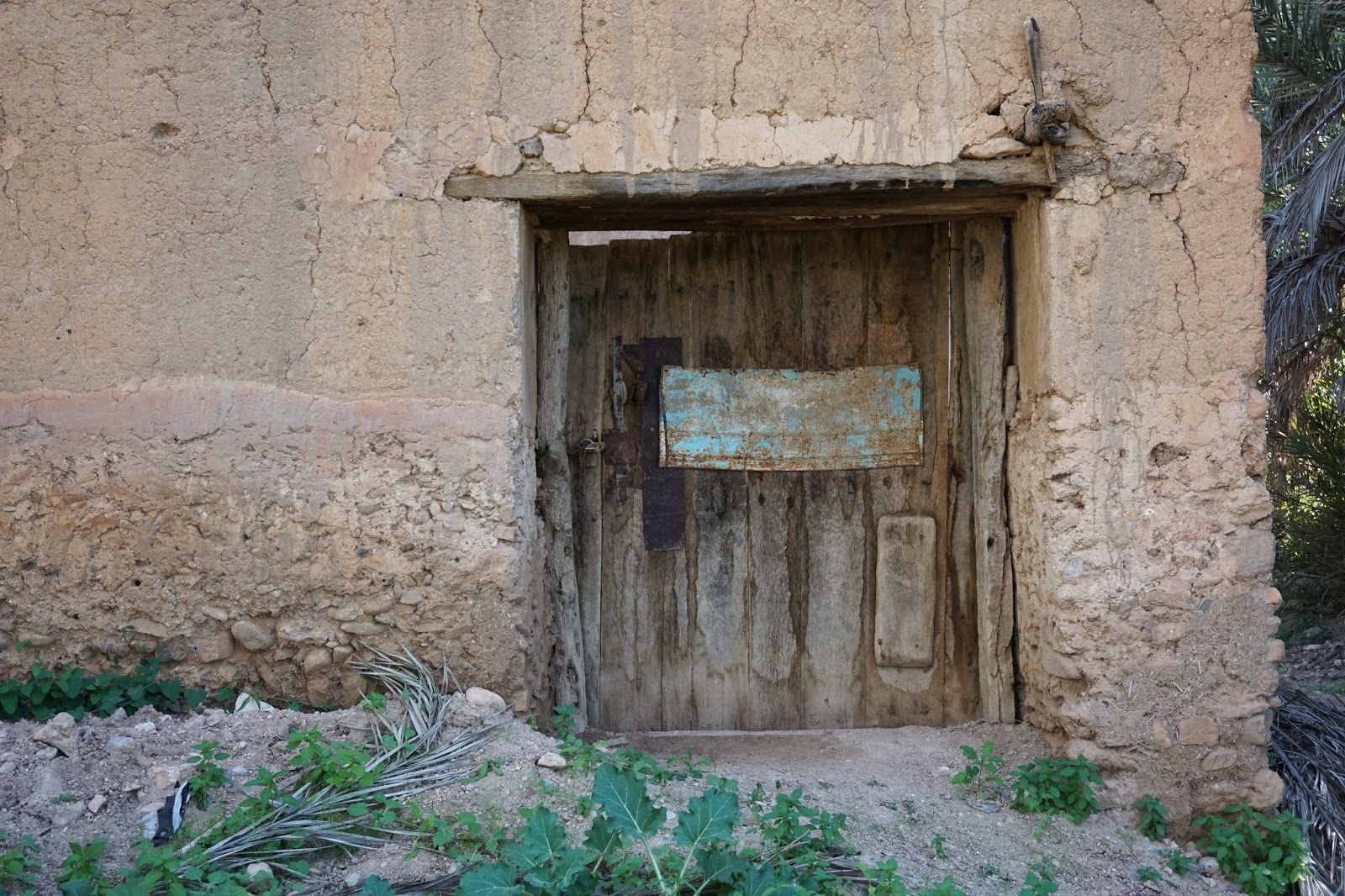 Skip ahead to the next afternoon when E and I went to the hammam with another French family. We were sitting in the steamy heat, covered in black soap when one of the other women opened the door to catch a breath of fresh air only to see the Moroccan woman who had soaped us up rifling through our bags in the ante-chamber. Pandemonium ensued with much shouting and crying and the other French family eventually storming out. We stayed, but it had spoiled our nice relaxing afternoon. The woman was apparently sacked, but not before she'd given us a good scrub down. 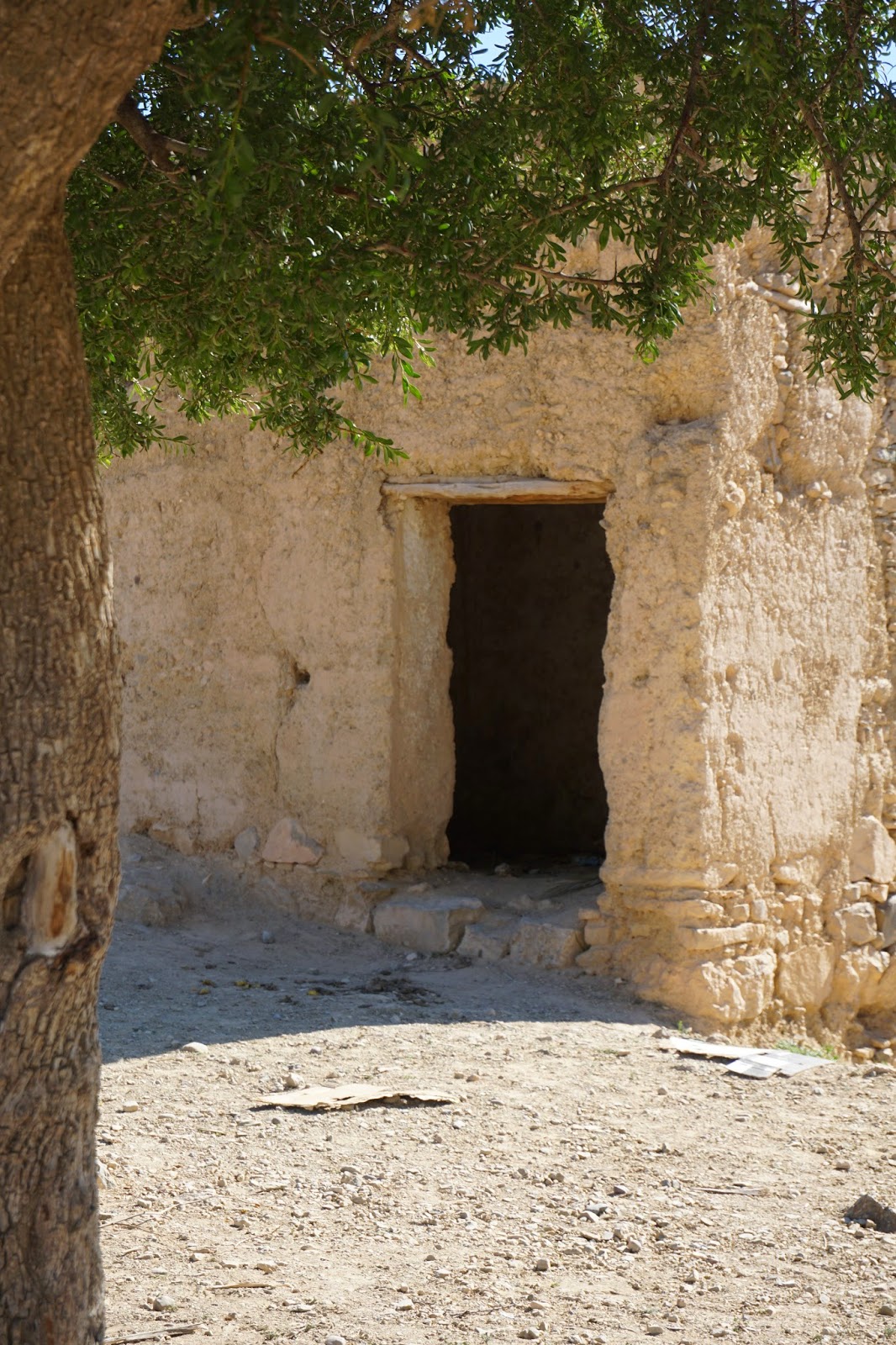 After that, there was a little tension in the air. We wanted to get out of Agadir, which to be honest is not the most beautiful city in Morocco. It was completely destroyed by an earthquake in 1960 and was rebuilt in a modern, concrete style. P. thought it would be best to go on an organised excursion in a minibus, but I fancy myself as an independent traveller and was all for hiring a car for a couple of days and heading for the hills. I won, of course. But once we got out of town our first stop, Taraudennt, proved to be a little bit too authentic and we spent the early afternoon racing round the town centre looking for sights to see, closely pursued by fake guides and menacing carriage drivers. Times are hard in Morocco and tourists are scarce at this time of year — we were sitting ducks. We saw nothing of note and nowhere that looked inviting enough to eat in. 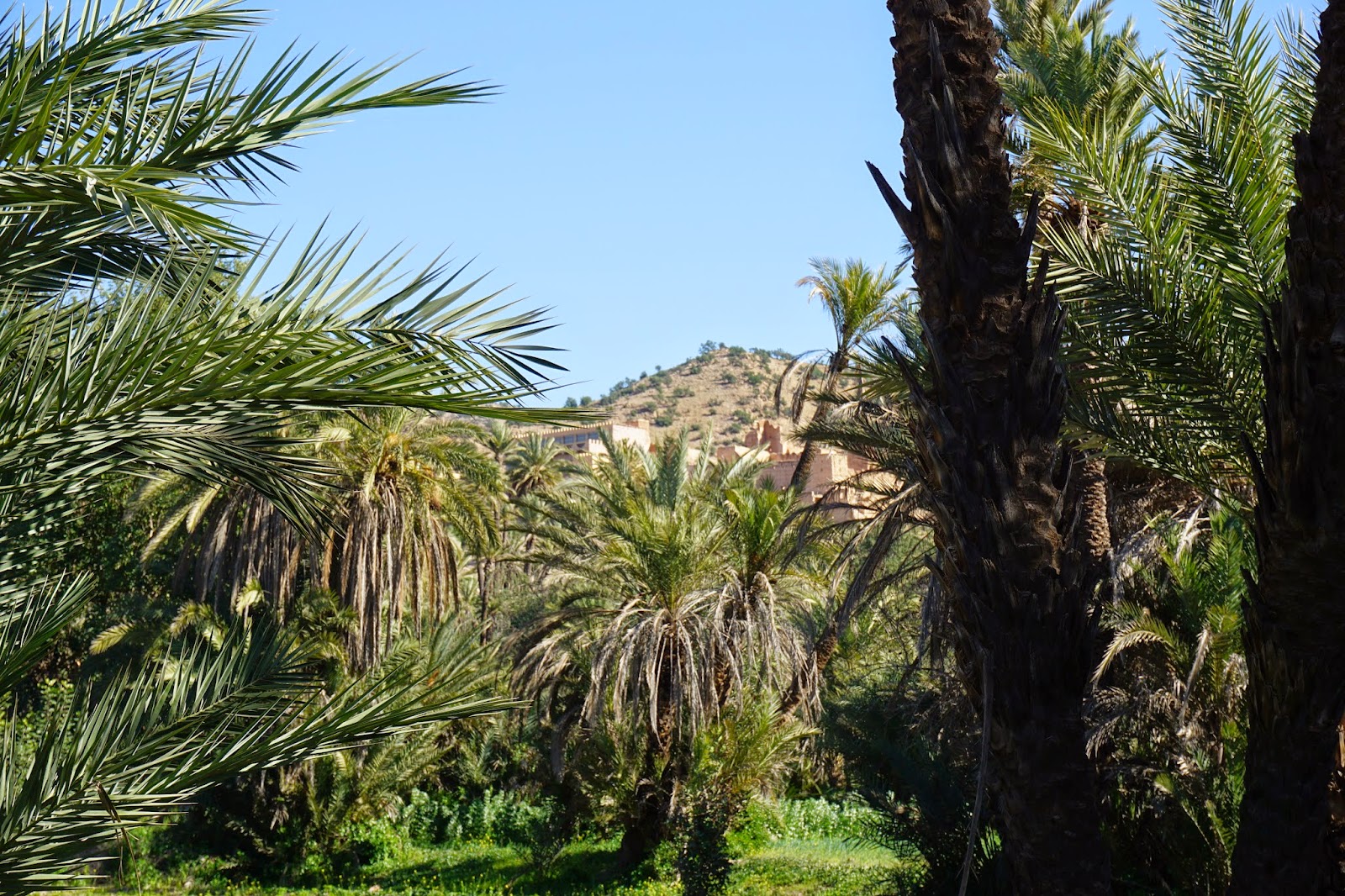 So off we went to Tiout on roads bordered by argan trees. As we drove into the village we were hailed by a man with two teeth who wanted to be our guide. We gave in and said all right we would have a quick look at the palm grove. Two hours later we staggered back to the car having seen a lot of interesting things but also having been subjected to a lot of veiled questioning about our opinions on Isis and Jews and beards. I had spent the entire visit agonising over how much money we should give him - how much is enough but not too much? In the end he was disappointed but we stuck to our guns, and then of course spent the whole journey back to Agadir in the evening rush hour regretting not having been more generous. 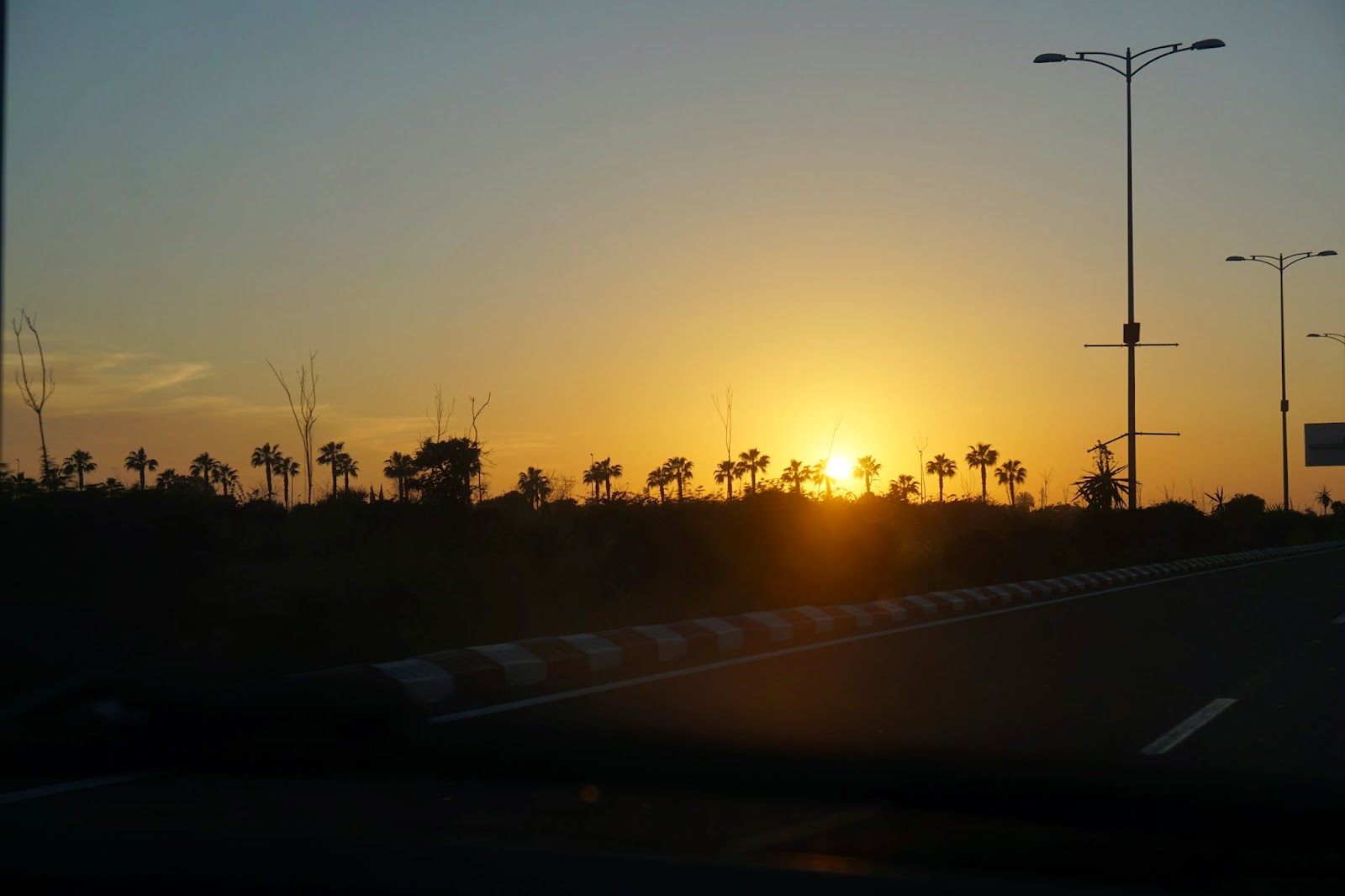