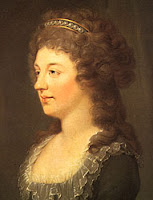 I've been reading Frank McLynn's biography of Charles Edward Stuart (Bonnie Prince Charlie) and discovered the story of his daughter, Charlotte, which I hadn't ever come across before.

Charlotte (1753-1789) was the illegitimate daughter of Charles and his mistress Clementina Walkinshaw. However the Jacobite prince battered Clementina and she left him taking her seven-year-old daughter with her. Because of her illegitimate status, Charlotte spent a good part of her life in various convents unable to marry and estranged from her father. He didn't recognize her until 1784 by which time he was an sick old alcoholic. She nursed him tenderly until he died.

A couple of years later she died too. She had never married.

However — and this is the interesting bit — Charlotte had a secret which she managed to keep from everyone including her father. She had had a relationship with the Archbishop of Bordeaux, Ferdinand Maximilien Mériadec de Rohan, and borne him three children - the third having been born just a few days before she rushed to Italy to be by her father's side. The children were brought up in secrecy by her mother mostly in Switzerland. The secret wasn't discovered by historians until, get this, the 1950s.
at June 13, 2010 5 comments:

There was a bit of a discussion going on on Twitter yesterday sparked by this article in the Guardian which claims that increasing numbers of Britons living in France are having all of their grocery shopping, including wine and baguettes, sent over from in vans from Asda. Then l'Anglais à Paris reacted to the article with a blog post entitled: "Why the hell did you move to France in the first place then?"

You'd think I'd have learned by now not to read the comments on any piece of writing on the internet that is even vaguely polemical: no good can ever come of it. But I did. I had to stop, however, when I reached the comment that argued that many people had come to live in France because they felt their national heritage was being drowned under Polish and halal goods in British supermarkets. The whole thing was just getting too strange.

I do still bring stuff back from Scotland but less than I used to — paracetamol and vitamins are cheaper; Heinz beans are just better; and the children used to love Ribena — and I have occasionally ordered household items from British companies over the internet. I also used to take French things back to Scotland, but my Mum says not to bother anymore because she can get a perfectly good piece of camembert in Tesco thank you very much. However, I wouldn't ever think of doing a virtual weekly shop in Asda. I mean why would I? To save a few euros? And who would I complain to when the wine shop, the chocolate shop, the boulangerie in my quartier closed down due to my withdrawing my custom? Je n'aurai que mes yeux pour pleurer.

And if you haven't had enough reading for one day, here's another bit from the Guardian on the evils of Tesco.
at June 10, 2010 8 comments:

Summer started for the third or fourth time this year on Friday, with temperatures shooting up into the thirties only to tumble back down to barely twenty this afternoon.

Anyway, the weekend kicked off well when I met up with the lovely Anne from Papilles & Pupilles for lunch in the sun on the Place des Chartrons. It was nice to finally get to chat with someone whose blog I've been reading for years. Anne's is one of the most widely read blogs in France and if you're ever looking for a recipe in French, the chances are that you'll end up on one of her delicious pages.

The rest of the weekend was all about Z. He's been having electric guitar lessons since the beginning of the year, and the time had now come for the end-of-year concert which was even bigger than usual because the school was celebrating its 25th anniversary. This had meant three consecutive evenings of rehearsals until much later than he's usually allowed to stay up on a school night. Saturday night was the big night.

But before that, there was Saturday morning and Saturday afternoon which were to be spent at La Fête du Rugby: fun and games and a tournament with all of the other rugby teams from the départment. It is a source of perpetual amazement to me that in France they often cancel rugby practice because it's raining yet, on days like yesterday, maintain fixtures in temperatures of 32°C!

Unfortunately Z was carried off the pitch after a badly executed tackle and arrived home on his father's arm still a bit woozy with a bloody nose, a mangled lip and a swollen cheek. Every mother's dream.

By mid-evening when he went off to the concert he was feeling better though. And I think you'll agree (if you can make him out in the front row of the guitarists in the video below) that he definitely has the makings of a rock and roll star. 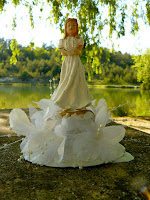 On the principle that the more you eat, the more you want to eat and that the more you have sex — actually that one may only work under a certain age — I have decided to force myself to write here a little more regularly and see what happens. It might be just a few lines of drivel, or even just a photo with a brief description, but at least I will be writing. Right? Righting. Write?
So what's been happening since I last wrote in April (yikes!)? Classes have slowly wound down and we're now into exam marking and boards and things but any spare time has been more than filled up with meetings and a big new research project.
We spent a great weekend in the Dordogne for P's niece's First Communion, although to be honest I wriggled out of the actual ceremony. The family own a lovely campsite in Plazac near Montignac, so we were able to spend the whole weekend together consuming massive amounts of Périgordian specialities. The children guddled in the lake. It was the only sunny weekend we have had for ages. The weather has quite frankly been unrelenting cloudiness for much of the last two months — so much for la dolce vita in South-West France.
at June 03, 2010 7 comments: