We're off to the land of smoked salmon. I wish you all a very happy Christmas.
at December 22, 2007 3 comments: 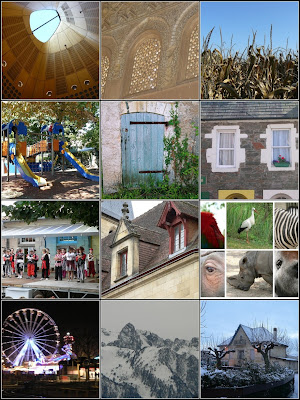 I have so far resisted regaling you with the tales of car-related woe that have occupied the last ten days. It started, as these things always do, with a funny sound and the car chugging to a stop in the middle of a rainstorm.

Two breakdown lorries, several hefty cheques, and reiterated protestations of disbelief from a Renault mechanic later, it all came to a head yesterday with the announcement that the car needs a new engine. This is a bit of a blow, to say the least, as it only has 110000 km on the clock.

Since ten days ago I've been biking it back and forward to work, so it turns out that the old adage is true: achetez Renault, vous roulerez à vélo.

And to top it all, this evening, P. pointed out that in telephone conversations with mechanics, I'd been inadvertently talking about the engine being deculotté (having its pants pulled down) instead of déculassé. I'm past caring.
at December 18, 2007 3 comments:

Two rather alarming things happened to me last week.

I sometimes take a shortcut through the anatomy department to get to my classroom. On Wednesday, as I strode briskly down the main corrider I glanced in an open door. An old man with white hair stared back at me - a cadaver lying on a stainless-steel dissection table. He looked rather startled himself actually.

On Thursday morning, the children and I stepped out of the front door to find that it was still quite dark. A rainstorm was brewing. Just at that moment, a black cloud loomed in towards our street at great speed, getting lower and lower and more and more menacing. It was an enormous flock of starlings.
at December 09, 2007 4 comments:

Books what I read this Year*

The Guardian Book blog recently ran a piece about the ubiquitous end-of-the-year book lists being the result of a universal need to create inventories. Well, I too have been seized by the need and to meet it I am going to inflict on you this list of books what I read (for pleasure not work) in 2007. Or the ones I can remember at least.

It wasn't an exceptionally good reading year to be honest. The best ones are at the top of the list, the bad ones are at the bottom, the middling ones are where you'd expect them to be.

Pay heed and you — unlike Ms Mac who didn't believe me — may save precious hours that would otherwise have been squandered wading through the codswallop that is Mercy.

The Stornoway Way, Kevin McNeil (I adored this book about Hebridean angst)
L'Elegance du hérisson, Muriel Barbery (about a dumpy, thinking concierge)
In the Country of Men, Hisham Matar (haunting)
Stranger on a Train: Daydreaming and Smoking Around America, Jenny Diski (puff, puff)
On the Atlantic Edge, Kenneth White (I like anything he writes)
One Good Turn, Kate Atkinson (Stories that fit inside each other and Edinburgh)
Hunting Down Home, Jean McNeil (Brilliant novel about an unhappy childhood in Canada)
Digging to America, Anne Tyler (adoption and "expat expat" communities)
Driving Over Lemons, Chris Stewart (Ah, Andalucia)
The Life and Times of the Thunderbolt Kid, Bill Bryson (he still makes me laugh out loud)
Bruce Chatwin, Nicholas Shakespeare (the only biography I read this year, and the third I've read of Chatwin)
Restless, William Boyd (will no doubt make a good film)
White Ghost Girls, Alice Greenway (growing up in Hong Kong)
Bella Tuscany, Frances Mayes (I want to be Frances Mayes or at least live in her house)
The Time Traveler's Wife, Audrey Niffenegger (I liked it despite the plot)
The Girls, Lori Lansens (tour de force novel about conjoined twins)
The Abortionist's Daughter, Elisabeth Hyde (why can't I remember anything about this?)
Miss Webster and Cherif, Patricia Duncker (old English woman meets enignmatic young Arab)
Ensemble, c'est tout, Anna Gavalda (liked the book more than the feelgood film)
Cleaver, Tim Parks (going mad in the snow in Austria)
Runaway, Alice Munro (Didn't realise this was a book of short stories until I got to "Chapter 2")
A Parrot in the Pepper Tree, Chris Stewart (more Andalucia)
The Almond Blossom Appreciation Society, Chris Stewart (even more Andalucia)
Me Talk Pretty One Day, David Sedaris (Funny, especially the father's food hoarding)
Salmon Fishing in the Yemen, Paul Torday (strangely old-fashioned characters and not especially funny)
The Dead Heart, Douglas Kennedy (read this in French, put me off kangaroo meat forever)
Europa, Tim Parks (English teachers go on a romp to Brussels - not his best novel)
The Box Garden, Carol Shields (the only Carol Shields I hadn't read - hasn't aged that well)
State of the Union, Douglas Kennedy (just finished this, still digesting))
The Tenderness of Wolves, Stef Penney (elements of Brokeback Mountain in the snow)
Weekend, William McIlvanney (not his best)
Blood in the Water, Gillian Galbraith (detective novel set in Edinburgh)
Mimi's Ghost, Tim Parks (Emotionless Englishman in Italy)
My Sister's Keeper, Jodi Picoult (more thought-provoking than I expected)
Moondust: In Search of the Men Who Fell to Earth, Andrew Smith (non-fiction for astronautaholics)
Touché :A Frenchwoman's take on the English, Agnès Catherine Poirier (quite clever, but more of a collection of newpaper columns than a real book)
The Night Watch, Sarah Walters (probably quite good but not my cup of tea)
Double Fault Lionel Shriver (really boring)
A Piano In the Pyrenees, Tony Hawkes (the I-bought-a-house-in-France genre is tired)
Long Way Round, Ewan McGregor (screams TV-spin-off)
The Queen of the Big Time, Adriana Trigiani (Little House on the Prairiesque)
The Five People You meet In Heaven, Mitch Albom (really sickly sentimental)
Bordeaux Housewives, Daisy Waugh (3rd rate expat chick-lit)
Merde Actually Stephen Clarke (3rd rate expat lad-lit, will never read the prequel)
Mercy, Jodi Picoult (should come with a health warning for Scots)

Princesse Ecossaise asked me to do this ages ago. I have to post a photo of my handbag and what's inside it. So, here's my bag. It's just a cheap one from H&M but I like it because it's soft and expandable with lots of little pockets. 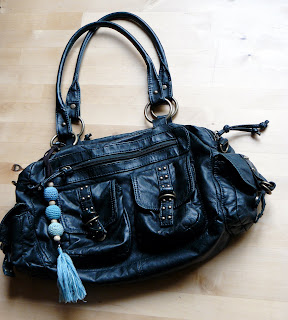 And here are the contents.

Bag Contents, originally uploaded by Lezzles.
Thinking about this meme, I remembered one of those '80s-style getting-to-know-you activities for EFL teachers (Rinvolucri?) and felt compelled to try it again in class. The other day, a new class concluded from my bag contents that:

a) I'm probably not very tech-savvy (due to the non-state-of-the art phone, cheeky buggers).
b) I have children (children's clothes shop loyalty card gave that one away).
c) I have sensitive skin (high factor sun cream).
d) I wear contact lenses (the case).
e) I was in Spain recently (tickets for the Alhambra).
f) I'm a cinephile (the cinema tickets. I didn't tell them that in fact we only drag ourselves to the cinema on average four or five times a year).

If you really want to know what the rest of that mess is, click on the photo and you will be beamed to a Flickr page with notes.

Having a research article published is a laborious process. First of all you sweat blood writing the thing and sometimes sweat real sweat presenting it at a conference. Then you submit it to a reputable publication. And then you wait and wait and wait, usually a couple of months. Then the editor sends you the reviewers' comments. The more reviewers there are, the more impossible it becomes to meet their contradictory requests. One may want you to flesh out the theoretical section, another to reduce it, and another wants you to add a whole new section on a different version of the theory that has taken his fancy.

You don't believe me do you? Here are three little snippets to give you a tiny flavour of some conflicting feedback I received this week. Spot the odd one out.

Reviewer #1: This is a well-written and interesting paper that tantalizes and leaves one wanting more.

Reviewer #2 I did find the manuscript to be extremely well written and engaging and the premise logically crafted.

Reviewer #3 The piece is not particularly well written