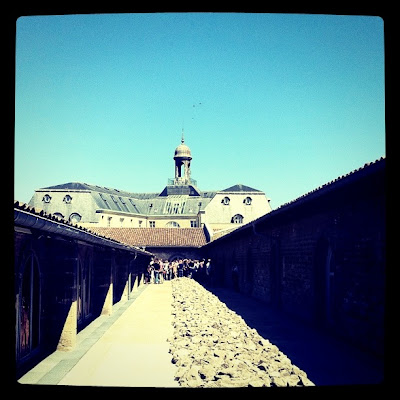 When I discovered that there was going to be a TEDx event in Bordeaux, I thought hell, yeah, I'd like to be there so I duly signed up and bought my 40€ ticket.

However, I hadn't really thought about why I was interested in the event. Like everyone else I've watched a lot of TED presentations on the internet. I find the format snappy and the content (almost) unfailingly interesting. But I hadn't thought about what the added value of actually being there would be as opposed to viewing later on a screen.

I spent a thoroughly enjoyable afternoon in the lecture theatre at Bordeaux's Museum of Modern Art, the CAPC, but to be honest it turns out that there isn't actually a lot of added value in being there. The organisers probably realise this and attempt to compensate by promoting the hour-long break as an opportunity to "network" with speakers and other participants. I'm useless at networking and I didn't make any new friends during the break but I did take the photo above of people mingling on the roof terrace of the CAPC at one end of that very long work of art.

The speakers aren't announced before the event so it's something of a pig in a poke, you just have to trust the local organisers to come up with a varied selection of good communicators with something interesting to say in no more than 18 minutes. In Bordeaux there were several excellent talks - slick presentations, well delivered with a clear and meaningful message, there was one truly dreadful presentation and the rest were middling. We heard about copyright and creation, the internet in Africa, a new type of physiotherapy centred on the pelvis, Montessori and the child's need for independence, Dead drops, Opensource software, new tools for NGOs, as well as musings on the future of the internet.

There were also two musical sets. One by a group called Sun Seven and another by a double bassist. I heard a little embarrassed sniggering during the latter - perhaps unsurprisingly free impro contemporary double bass doesn't seem to be everyone's cup of tea. Fadhila Brahimi later got us all to stand up and sing together. More used to being on the giving-orders side of happy-clappiness, I tend to get a little panicky when press-ganged into any group activities and was more than relieved when it was time to sit back down again once the rather facile lesson that companies should make people work together more had been made explicit.

Other lessons that I gleaned from the afternoon:
The theme was "Ensemble" , and most speakers paid lip service to that idea in some way. After the intermission, a young man asked me if I would mind moving back a row so that he and his friends could have six seats all together — "puisque le thème, c'est ensemble" he added without the slightest hint of irony.

Email ThisBlogThis!Share to TwitterShare to FacebookShare to Pinterest
Labels: TedxBordeaux

A Stroll in the Jardin Botanique 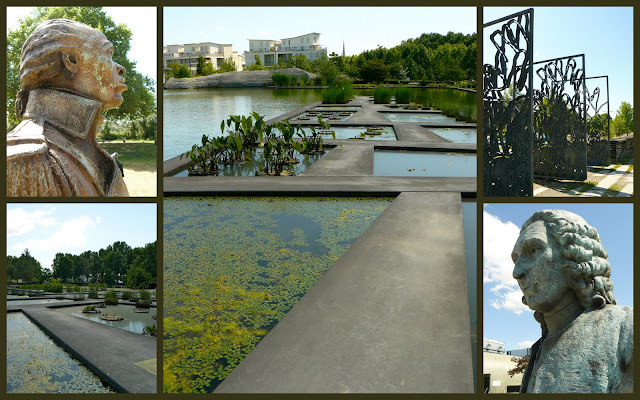 Not this weekend but a couple of weekends ago, and really just an excuse to play around with Picasa which mosaic-maestro Lucy pointed me to.
The Linnaeus bust in the bottom right-hand corner is the work of the talented Lucie Geffré - I think he's aging well. As indeed is the Jardin Botanique itself. A few years ago it was brand new: a flat, mineral wasteland in the then unpopular Bastide quartier. Now, it is a watery, green place busy with families picnicking on travel rugs, babies napping in prams under trees, and elderly people peering at unfamiliar plants.
at May 22, 2011 4 comments:

The Slap by Christos Tolkias 2011. Recounts, person by person, the repercussions in an extended Greek-Australian family of a father slapping someone else's unbearable child. Tails off into tedious psycho-drama in the second half. Would make a good film.

Started Early, Took My Dog by Kate Atkinson, 2010. I can't help feeling that Kate Atkison underuses her talent in this series of books. They all hinge of on the coalescence of unbelieveable coincidences, a device that I think undermines her fabulous sense of character and narrative. Still a great read though. Best line - "ladies who lurch".

Blink: The Power of Thinking Without Thinking by Malcolm Gladwell, 2006. I enjoyed this account of the mechanisms and effects of instant decisions and intuitions. I'm highly sceptical though about the theory that says that certain Americans are more impulsive because their forefathers hailed from the Scottish-English Borders where cattle rustling was rife and aggression the only means of survival. We are generally quite a peace loving nation, honest. Anyway, I enjoyed it enough to download "Outliers" and I'm in the process of finishing that.

The Chronology of Water: A Memoir by Lidia Yuknavitch, 2011. A friend recommended this authobiographical narrative in terms that were more incandescent than glowing and I was blown away by the writing which was quite unlike anything I have ever read before. Despite some reservations about aspects of the story (especially the complete absence of any self-criticism ) and its delivery - I object to being collared by authors as a singular "you" who probably doesn't "get it", I recommend this book wholeheartedly.

Solar by Ian McEwan, 2011. Extremely funny - I frequently guffawed at McEwan's portrayal of this puffed-up middle-aged man. I especially liked the bit where he "only half ran back to his car" after an altercation with a burly builder because "he had his dignity".

Paris to the Moon by Adam Gopnik, 2001. American journalist lives in Paris, writes articles about life there than realeases them all as a book. And it's a good one, if slightly dated now.

How to Live: A Life of Montaigne in One Question and Twenty Attempts at An Answer by Sarah Bakewell, 2010. I loved this venture into literary popularization that cleverly intertwines a biography of Montaigne with readings of the essays. By half way through I was itching to read the essays themselves.

The Gravedigger's Daughter: A Novel by Joyce Carole Oates, 2008. A slightly tedious historical novel. I'm not quite sure what the point was.

Teach Us to Sit Still: A Sceptic's Search for Health and Healing by Tim Parks, 2010. I blogged my rather self-indulgent reaction to this quite brilliant book a while ago.

The Secret Diary Of Adrian Mole Aged 13¾ by Sue Townsend, 1998. I had never read this and thought it was about time I filled this gap in my popular culture reference system. I read The Cappuccino Years too, but that's enough.