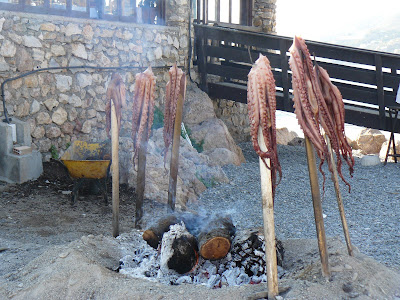 So I should really be packing I suppose because I have a class tomorrow evening until 6.30 pm. and we have to get up at 4H00 the next morning if we're going to catch our plane in San Sebastian at 8H40. This is the cheapest way I could find of getting from here to Andalucia without spending 14 hours in a car. So if it all goes smoothly we should be in Granada before midday on Saturday. It looks as if the weather down there is pretty good; a lot warmer than here anyway, but just in case and since I don't like my skin to touch anything cooler than bathwater, we've taken a villa with a HEATED SWIMMING POOL!

Photos I might have taken this week if I hadn't forgotten my camera: the wonderful stained glass windows in the old chapel I was working in for a conference at in the university on Tuesday. This building is a ten-minute walk from my house and I had never been inside. The conference was in honour of Linnaeus - it's his 300th birthday. The following day I went to the inauguration of "L'Esplanade Linné" in the Botanic Gardens on the other side of the river. Had I had my camera, I would have been able to show you photos of the wonderful bust Lucie Geffré sculpted of the bewigged Swede.

In other news, swivel your eyes round to the right and you'll see that I've added a couple of things to the sidebar. A twitter box, so that you can share in my every thought as it happens and a box of interesting stuff which is really just anything that I come across in Google Reader and think others might like too.

And here's Z's latest rugby picture (we have rooms full of these). It depicts the haka before the match he enjoyed best during the Rugby World Cup. Click on the image to make it bigger, he put a lot of work into the All-Black detail. 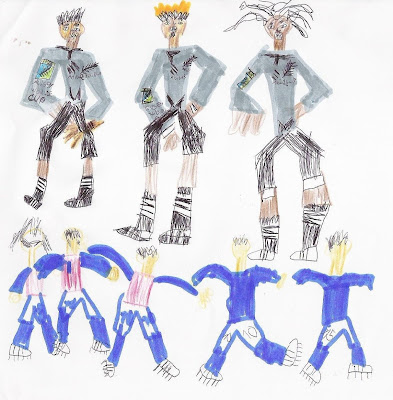 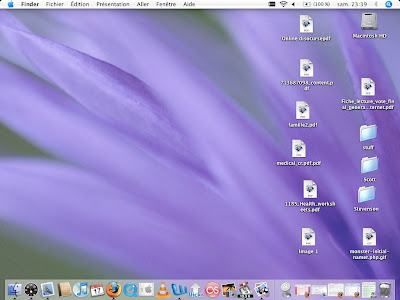 Ms Mac has tagged me for a meme that involves me showing you my desktop as it is right this very minute. Lucky then, that I had just cleaned mine up a bit in preparation for projection onto a big screen in front of lots of sharp-eyed students. The wallpaper is a random picture from the Macintosh "plants" set, the image changes every five minutes. At one time, I had my own photographs as wallpaper, but I found that distracting. The files on the desktop are mostly work-related. One of them should be entitled "online discourse" but I see that I have mangled that so that it has become "online disocurse" which sort of says it all. Some of them are things that P. must have downloaded perhaps inadvertently: a "fiche de lecture" for detective novels, two catalogues of sundry items for doors windows and garages (looking for a wide strip of rubber to place over the entrance to our garage under the door — a thing that seems to be impossible to buy). The "Scott" dossier contains files for my last conference presentation, the "Stevenson" dossier is a collection of files for a possible conference presentation in June in Italy. Image 1 is an aborted picture of my screen which I took without having first closed a couple of windows, duh. The dossier enigmatically and unimaginatively called "stuff" contains dozens of torrent files for Grey's Anatomy (crappier and crappier), House (still brilliant), Prison Break (whose head was that in the box?), Ugly Betty (still funny) and Weeds (jury's out). The file in the bottom right hand corner called monster-initial-namer contains this:

So now you know all about my dirty desktop secrets. If you want to see some other desktops head over to
Now, who could I tag? What about Spentrails, Sam, Princesse Ecossaise, and SusieJ. I'm thinking one highly efficient desktop, one desktop with a tartan background, one with pictures of hunky rugby players and one with secret files on industrial espionnage.
Oh, and I haven't been very good at copying out the exact instructions so you'll have to go back to Ms Mac for those.
at October 21, 2007 8 comments:

I see that Anne Enright has won the Booker prize. I have not read any of her novels but I have noticed her writing in the London Review of Books. I think the first of her articles to draw my attention must have been "My Milk" published in October 2000 just before I had my first baby, so I probably didn't get round to reading it until about Christmas that year. By which time the subject of the article, breastfeeding, had become an all-consuming way of life. There are lines in the article that I quite liked :

...what fun to be granted a new bodily function so late in life. As if you woke up one morning and could play the piano.

but I didn't really get the whole thing, the intellectualising of something that, for me at least, was like falling off a log. I loved breastfeeding: it wasn't painful, it wasn't a source of offense, and it certainly wasn't sexual.

More recently I read a diary column by Anne Enright on "Hating the McCanns". It is provocative and it is cruel — somebody wrote a letter to the LRB the following week saying that it made him hate Anne Enright — but it is also honest. I can't help thinking that I too have been irritated by the "wounded narcissism" and the "corporate-executive" speak that the McCanns sometimes project.

I have been gently chastised for not blogging, so here I am jumping back into the blogging movement — that never-ending, burbling stream of drivel.

I have been reading Muriel Barbery's L'Elégance du Hérisson (see side bar) and wallowing in her beautiful prose. The novel is about movement and more specifically precise, fleeting beautiful movements.

My own movement recently has been from Bordeaux to Nantes and back again by train: movement from one city to another, from home to hotel, from family to colleagues, from frantic preparation of a conference paper to the restitution of the paper as a presentation. When I got back from Nantes late on Saturday evening, the house was full of friends glued to the frustratingly staccato movements of 30 men on a rugby pitch - no French flair fluidity there, I'm afraid.

Sunday was spent in Rions, a medieval village - watching the alarmingly rapid movement downstream of muddy water as we picnicked on the banks of the Garonne.

Then there's the planned movement south for our upcoming half-term holiday: flights to Granada are booked, now we just need a car and somewhere to sleep (suggestions?).

I'll resist the temptation to take up the discussion on bowel movements initiated by Sarah in the comments to that last post!
at October 15, 2007 6 comments:

I'm doing some research at the moment using a Google scan of a book. Luckily, this isn't a page I'm going to be quoting from! (I wonder where one gets those little-fingerless latex gloves.)
A Visit to Paris in 1814: Being a Review of the Moral, Political ... By John Scott: "

I've never been to Burma, but I would like to be able to go one day. Click on the image and learn more about the campaign.

It seems incredible now but when I first started teaching, students would regularly ask if it was all right to smoke in the classroom. It's even harder to believe that I would invariably acquiesce, just so long as they agreed to sit by an open window.

Why, when I wasn't even a smoker, did I agree to having the room filled up with acrid fumes and students concentrating more on blowing perfect smoke rings than attending to the finer points of English grammar? I can't honestly remember. Perhaps I was more scared of students then than I am now. Perhaps I secretly wanted to be a smoker but never quite managed to get past the nausea. More probably, I had some warped idea about being accommodating and respecting their freedom even when it impinged on mine and I was definitely not keen on the idea of being labelled a puritan spoilsport.

I didn't want to do as I was told, I didn't want to be more comfortable by conforming, giving in, as I saw it to the pressures of an anti-smoking policy that was reinforced by moral imperatives. Very childish. Yes, exactly. I also didn't want to become an ex-smoker, not if it meant that I became someone who tsked and sighed whenever I caught a whiff of smoke in the air. ... It was almost organic, my desire not to be a virtuous , self-righteous non-smoker.

I can relate to this in a non-smoking sort of way. I really organically don't want to be that sanctimonious disapprover either.

But now, as the smokers in France wail about the looming ban on smoking in bars and restaurants without ever really believing that it will come to pass (smoking is already banned in all public places but, this being France, places selling food and drinks got a reprieve until January 2008), I can't help thinking about how much more pleasant it is to go out in Scotland where the smoking ban has been a great success and there's no need to worry about having to become the intolerant tsker that I never thought I would be, as vile smoke wafts up my nose.

So much then for being a right-on understanding non-smoker then. But if only someone would invent a smokeless cigarette, I promise I would be tolerance personified.
at October 03, 2007 4 comments: