Back from ten dozy days in the Dordogne. I forgot to take the recharger for the camera battery but here are some of the photos I might have shown you:

A ruby red bottle of Pécharmant on the table of a little restuarant in Périgueux.

Magret brochettes on the barbecue.

A gaggle of butterflies on various buddleia bushes dotted around the garden at Pomerède.

Z wobbling as he learns to ride his red bike with no stabilizers.

My legs in a horizontal position as I lie reading on the famous swing (more on the books in a later post perhaps).

Green walnuts as far as the eye can see.

And various conviviality pictures of people raising glasses and chatting during dinner.

The children running around outside in the moonlight.

Meanwhile....... We returned to the house expecting to find all work finished so we were somewhat surprised to discover that the rewiring is still at the evisceration stage upstairs, we have no hot water and the windows seem to be in the right places but some of them are unsealed. Here we go again.

The Kenneth White books arrive. I open one at random and read this:

Thinking about:— a good place for lunch with my man P. (Le Casse Museau perhaps?)

Still to do: — Go to bank to sign document I forgot to sign yesterday to get lolly to pay for new windows.

People in my house: — two electricians and a family of window fitters (Portugeuse).

What the children are doing :— Probably sleeping because they were up to high jinx until very late last night. It's their last full day at the childminder's house.

Last thing I listened to on my Ipod : Took the tram to work and listened to Ben Curtis's podcast "Notes From Spain". Very atmospheric. makes me wish I was going to Spain for the holidays.

Last thing I bought: A couple of books by Kenneth White on Ebay : they haven't arrived yet. Kenneth White is a Scottish poet who lives in Brittany. Wanted to show you photos but Safari crashes every time I try to upload them.

Other Ebay news : Last week sold an expensive toy that E has grown out of for......... 1€. Once I had paid the Paypal commission etc. I actually made a loss. Brother tells me he is trying to flog some Bank of Scotland £5 notes featuring Jack Nicklaus.

Plans for tomorrow: Drive to P's parents' place in the Dordogne. Allow children to run wild. Lie down on swing for the rest of the week.

Window
Originally uploaded by Lezzles.
The men are coming on Monday to change every single window in the house. So bye bye old wooden windows that require much banging and pushing and grunting to get open, hello new smooth, double-glazing.
at July 16, 2005 4 comments: 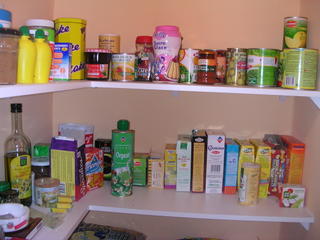 Look! Tidy, well-filled shelves in the new kitchen. Now, if only I could organise my paperwork that easily. 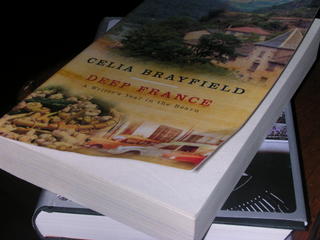 Just as I like to read English-speaking bloggers living abroad, I am attracted to books by English-speaking people living over here. Yes, I read « A Year in Provence » and thought it was patronisingly awful. I much preferred Tim Parks' books about Italy. A couple of summers ago I read two good ones about Tuscany (one with superb recipes none of which I actually tried needless to say). And an excellent one by an English woman living in Cérét. She never actually names the town but it’s quite easy to work out where it is and it’s also quite easy to work out who her temperamental French lover is because he’s a dentist and an artist. (Still don’t get it? You’re obviously not stalker sleuth material. You look up all the dentists in Cérét in the yellow pages, there are only a couple and then you Google their names and find out which one has had exhibitions of modern art. A pointless exercise, I know, but strangely satisfying.)
It’s so easy to be a smart alec when reading the “Year in “Somewhere (preferably little-known) in France” “ books because I’ve go a twenty odd year start on them. In fact, I suspect that’s why I read them; they make me feel clever. Here, then, are a few corrections for Celia Brayfield author of “Deep France: A Writer’s Year in the Béarn”.

• The word “trocante is not a mixture of truc and brocante but of troc and brocante (much more logical)
• Cousteau does not mean strong and burly, costaud does. Jacques Cousteau could not, therefore, be translated as “Jack Burly”
• The presenter of “La Grande Dictée” is not a professor. He’s Bernard Pivot, a t.v. personality

I could go on but it would be tedious. What strikes me is that these mistakes are due to sloppiness, they could have been corrected by ANY French person. But the year in France didn’t seem to include very many of those.

I’m also drawn to books by Scottish women. Imagine my joy then, when I came across a mistake about France in an otherwise excellent book by a Scotswoman; Jennie Erdal’s “Ghosting”. She describes the regular trips she made from Bordeaux airport to the “heart of the Dordogne” and how her heart would lift when she saw the gates bearing the names Château d’Yquem, Château Margaux.* Didn’t she have a map?
But now I feel churlish criticising these people who may not know France as well as I do but who do seem to have a real affection for the place, especially when others, like this creep, hate France and the French so much**.

* For the few of you who don’t live in the Bordeaux area, these châteaux are nowhere near the road to the Dordogne.
** Via Blethers.com - Stuart Mudie's weblog

This is a free association memey thing which "is supposed to help bring forth repressed thoughts and feelings". Give it a go yourself, the words change every week.

I need a holiday

Still thinking about the difficulties of bringing up children and although mu children don't need them quite yet, the following two absolute rules sound about right:

"Never have unprotected sex" [...] "And never, ever get into a car with a driver who's been drinking, including yourself"

Wise words. I read them in Anita Shreve's novel "Light on Snow" this weekend while rocking in a swing in the Dordogne.