Today we spent the day in Bazas - a small town south of Bordeaux with an enormous gothic cathedral and a unique race of cattle. Every year they fatten the cattle up for five months and then they parade the best specimens through the streets of the town behind tractors to the main square where they are weighed, judged and admired.

Pauvres bêtes, one look in their puzzled eyes makes it all seem a bit barbaraic really. It's almost enough to make one want to give up having animals fattened and killed in one's name.

If only it didn't taste so absolutely delicious.

Not your average Friday evening 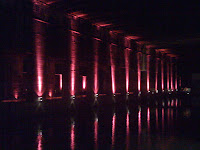 We took in two events on Friday evening. One for the eyes and one for the ears. Actually I was hoping that the first one would be for the stomach too, but that wasn't to be.

I put on my long red, velvet jacket — only ever donned for very special occasions and then only events that take place in suitably dark places lest I should dazzle anyone — and we headed over to the submarine base, la base sous-marine. During the Second World War, when Bordeaux was occupied by the Germans, Hitler decided to build a massive concrete structure to protect his submarines. It's a hideous monster of a thing but difficult to get rid of because it has such massively huge walls and was built to withstand bombing. After many years of not knowing what to do with the site, Bordeaux has turned it into a sort of arts centre - it's filled with water and used to be a museum of pleasure boats but that wasn't much of a crowd-puller. 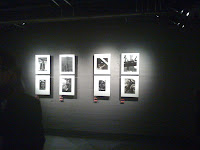 We'd received an invitation to the vernissage of an exhibition of work by the American photographer Louis Stettner. The rest of Bordeaux, it turned out, had received the same invitation and they were there in their droves, crowding five-deep around the drinks tables, pushing and shoving to get the Franco-American food on offer. We managed to grab a glass of something but gave up on the food when we discovered that the exhibition space itelf was really quiet, and the photographs were wonderfully evocative of Paris and New York when we imagine everything was black & white. 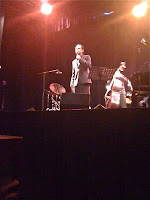 From there we drove to Cenon in the suburbs and had a quick drink before heading off to the Kurt Elling show (I'm never sure what to call these things now - "concert" sounds fuddy duddy, "gig" sounds faux hip). Just in case, like me, you had never actually listened to any Kurt Elling — he's a jazz vocalist. In fact, he's a stupendously talented jazz vocalist with a voice that is like nothing you've ever heard before. And certainly not in Cenon on a rainy February evening.

I was going to say something about him being creative and his voice being "powerful" but I really don't have the vocabulary or the musical knowledge to talk about what I heard, but I know I loved it, so just go listen.

Kurt is in fact a friend of friends (so he's really our friend once removed) and we had drinks afterwards. And I'm happy to report that he's an extremely nice person as well as an awesome performer.

....and if you've been reading closely you'll have realised that on Friday night although I had plenty to drink, I had not a single thing to eat.
at February 11, 2009 6 comments:

You didn't really think I was going to leave you on that dithyrambic note, did you?

And most of all I detest the dog shit that lies in wait on the pavements.
at February 06, 2009 12 comments:

Things I love about Bordeaux. I love the quais and walking by the milky water of the Garonne river. I love the luminous honey colour of the façades that line the quais. I love whooshing through the town in trams with no messy overhead cables. I love the market at Saint Michel on a Saturday morning. I love walking the entire length of the rue Sainte Catherine from the Place de la Victoire to the Cours de l'Intendance, gradually moving up the scale from cheap import shops to expensive luxury boutiques. I love the smell that wafts out of perfume shops. I love Saint Pierre when the restaurant terraces are full and people flânent past on a warm evening. I love the mascarons on the 18th century façades. I love the fact that I know shortcuts through quartiers that I used to live in. I love knowing of high places that afford a bird's eye view of the town's marmalade roof tiles. I love the sedimented associations attached to various eating and drinking places. I love the sparkling air in spring. I love the cobbled streets. I love the bookshop La Machine a Lire. I love the Chartrons and its mixture of antique shops and recently renovated loft apartments. I love the smell of fresh baguettes as the bell tinkles on the way into a good boulangerie. I love cannelés - their taste has grown on me over the years. I love knowing where to look to see a reliably beautiful wisteria in the early spring. I love the miroir d'eau and it's haziness in the summer. I like knowing that Michel de Montaigne and Mauriac and Goya and Hölderlin also liked the city. I love the massive door knockers. I love cycling the wrong way down side streets. I love the area around the Utopia cinema and the constantly changing mass of people milling around before they go to see a film. I love cafés with well-worn tables and chairs, and the ambiance in the Café Brun. I love the Entrepôts Lainé and the modern art that fills them. I love the big fairground van that makes guimauve while the fair is on the Place des Quinconces and the Big Wheel that sits behind it. I love the Monument des Girondins. I love the Capucins market during the night. I love the shared history that allows me to say that the new Zara used to be Bouchara and before that it was HMV and before that it was XL and before that Printemps. I love to think of the Chartrons when Scottish wine merchants lived there.
at February 04, 2009 6 comments:

The very nice people at Entendu à Bordeaux — Anne-Flore and François — interviewed me and the result is here.

Trying to think of half-decent answers brought home to me just how little I have mentioned Bordeaux on this blog. I'm going to try to put that right in a future post but for the moment here is some photographic evidence of the city's many attractions.