I’ve lived here for a long time now and generally I’m pretty much at home in France. I’d say that with a few idiosyncratic tweaks, French culture is more or less my culture*. But yesterday evening I had to go to a memorial mass and it was brought home to me that I’m really just an imposter here.

I’m not a Catholic and church services here are an absolute mystery to me. (My English-speaking Catholic friends tell me that it isn’t much clearer for them). For a start, I have no idea when to stand and when to sit and end up doing everything several seconds after the rest of the congregation. The priest makes some innocuous pronouncement and with no warning the entire church answers in unison giving me the fright of my life. Sometimes they all mumble the same words with total confidence, sometimes they all sing a couple of lines, sometimes they all cross themselves. Meanwhile I’m left fumbling around, surreptitiously glancing sideways to work out what everyone else is doing and and trying to look as inconspicuous an idiot as possible. Usually I have P. with me to prod me in the right direction, but last night I was all by myself.

At least this time I wasn’t fooled into queuing up with everyone else while they waited to take mass – something I’m pretty sure I'm not allowed to do anyway. Last time I joined the queue by accident and ended up having a statuette of Jesus thrust towards my face. I kissed the wee plaster man on the lips – it just seemed like the right thing to do. How was I supposed to know that it’s the done thing to kiss his feet ? 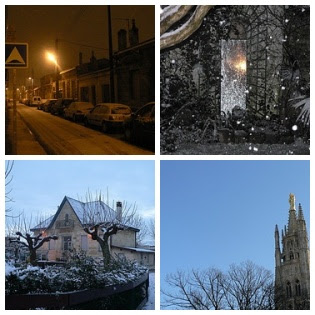 This post is dedicated to anyone who might have escaped from South-West France to sun and warmth. Just to let you know that we would much rather get our wellies on in the morning, with scratchy scarves and gloves and kick our way through slush to school and work in 0°C, than ride on elephants’ backs and meet crocodiles.
at January 25, 2007 4 comments:

Email ThisBlogThis!Share to TwitterShare to FacebookShare to Pinterest
Labels: snow

The good news for those of you who follow Grey’s Antomy is that Heather, the girl with the terrible scoliosis seems to be doing fine. I know this because I saw her snogging Edie’s nephew in the back of a car parked in Wisteria Lane.

I’m now waiting in eager anticipation for the episode where Bree discovers that Orson was once called Trey MacDougal and married to Charlotte in Sex and the City.

And as if that wasn’t mysterious enough it turns out that the English teacher in My So-Called Life is also Meredith’s father, and they tell me that he also has a secret life as the President’s brother in a sneaky actor change in Prison Break 2.

There’s something unsettling about all of this inter-series penetration if you ask me [and if you arrived here through a Google search for that specific phrase, hop it.]
at January 23, 2007 4 comments:

Not yet the age of reason

Email ThisBlogThis!Share to TwitterShare to FacebookShare to Pinterest
Labels: gizmos

Remember all that work we had done on the house about a year and a half ago? Well, all has not gone smoothly since then. I'll spare you the details but here are a few key words : leaking pipe, mouldy wall, undulating parquet flooring... So the insurance man came a couple of days ago. He fixed the appointment for 8a.m. This is not a good time for me but I did manage to whip round and get the living room to look relatively tidy. He inspected the suspect area downstairs under which a pipe carries rain water from the back garden along a stone wall and out into the street at the front. Then he asked if he could have a quick look upstairs. "Upstairs? Yes, of course" I squeaked. As he picked his way through abandoned pyjamas, unmade beds and forgotten toys, I felt a surge of sympathy for one of Dr Crippen's patients:

The first patient of the day was an elderly lady with a painful foot. She took off her left shoe and stocking to reveal an inflamed bunion, and an infected in growing toe nail. I asked her to slip off the other shoe and stocking so that I could check the right foot. She hesitated. “Do I have to, doctor”. I said it was helpful to compare the two, and I needed to check the state of her other toes and toe nails. Clearly reluctantly, she took off the right shoe and stocking. Her right foot was filthy. Very smelly. Dirt under all the toes nails. Her left foot was spotlessly clean. She had washed one, but not the other. I pretended not to notice, but she put her hand on my arm and looked at me. “It’s not easy. I am alone.”

There's nothing like a long train journey in January to find out what everyone got for Christmas. I spent almost the entire day on Friday in various trains between Bordeaux and Dijon, leaving the house at 5H30 a.m. and getting back at 12H30a.m. - that's a lot of train. Apart from admiring shiny new Louis Vuitton handbags, I also got to sit beside people with hissing earphones of all shapes and sizes. Two young lads walked the length of one train with prized PSPs in their hands, both playing music, both without headphones. A young couple turned on a Nintendo at the Gare de Lyon and didn't turn it off until we got to Dijon. At night, between Paris and Bordeaux as I watched the first couple of episodes of Desperate Housewives 3 and puzzled over that British accent, the guy on my left watched something I couldn't quite make out on his laptop, the guy on my right watched King Kong and the guy in front of me watched Lord of the Rings.
Yes we were all very smug about our Christmas presents. As I got off the train I looked around to see if there was any sign of the homeless person I'd walked past early that morning sitting in the cold and dark outside the station holding a baby wrapped up in a blanket. It's an ill-divided world.
at January 16, 2007 4 comments:

How is it that the interior we decked out with cards and lights and decorations that looked so sparkly and festive before Christmas now looks so pathetically tawdry?

Nancy has kindly tagged me for the Five Things About Me meme, so here goes:

2. I have dislocated both of my knees. This is not an experience I recommend.

4. I have worn contact lenses for the past twenty or so years. I now occasionally need to wear reading glasses on top of my contact lenses, specifically every time I want to read something. I find this somewhat irritating.

5. I once wrote a PhD thesis on the subject of Nineteenth Century Scottish Travellers in France. As you can undoubtedly tell from the title, it's an unputdownable read.