Towards the end of the Christmas holiday, we spent a few days with friends in the Basque Country. The weather was mild and we managed a visit to the Musée Basque in Bayonne, a couple of hikes in the rolling hills around Biriatou and Espelette as well as a quick boat trip into Spain. It's just as lovely a part of the world in winter as in summer. Here's a quick slideshow of some of the pictures I took. 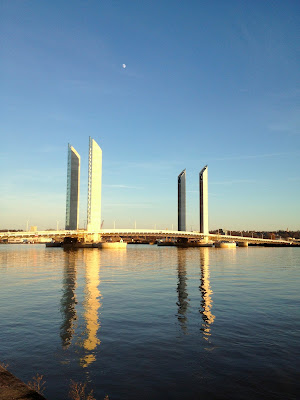 On the first of January, I walked across the new bridge that spans the Garonne along with the children, their friend and 40 000 other Bordelais. The contrast between the ultra modern vertical lift bridge and the more central Napoleonic "pont de pierre" is striking — the new bridge is unfamiliar, sleek and shiny, the old bridge ancient and honey-coloured. Another nice contrast is provided between the bridge's official name, "le pont Chaban Delmas" for the long-time mayor of Bordeaux, and the name most people seem to be using "le pont Baba" from Bacalan-Bastide, the two quartiers that it links.
I'm sure I could extract some significance from this ritual crossing: something along the lines of making new connections; the new link between left and right bank and their social make-ups; a city coming together to celebrate the river that runs through it, the passage from one year into the next, the old one so much water under the, er, bridge.  To be honest, however, people were subdued, there was no sense of symbolism or celebration and for most it was manifestly simply pleasurable to be out in the fresh air after such a short night. But then most of weren't actually going anywhere, we were crossing over just to come straight back again.

(This is one of those panorama photos from my iPhone, the bridge isn't really bent in the middle) 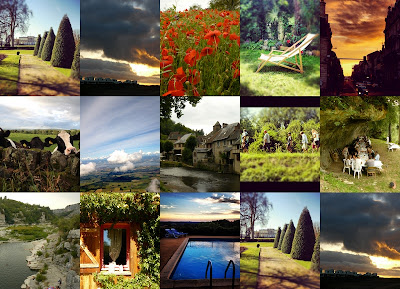 Bye bye 2012. Fun was had.
I seem to have messed up that photo mosaic since the first two photographs are also the last two. Never mind. I also notice that my favourite photographs are mostly taken during the holidays and at weekends; not so surprising perhaps since the highlights of the year are rarely the humdrum moments spent at work, cooking dinner, folding laundry, catching the tram, looking for lost belongings, shopping. I wish you all a very happy new year of highlights thrown into perspective by lowlights.
at January 01, 2013 2 comments: