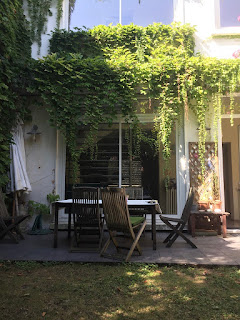 2 things I noticed on a day I didn't leave the house.

A synthetic jumper I bought in Primark in Edinburgh and that kept me warm in the National Library reading room looks rust-coloured in artificial light but a rather alarming Irn-bru orange in natural light.

A white cat slinks through the garden looking for birds to kill.  When I send it on its way with a loud hiss, it manages to look haughty even as it panic-scrambles up the wall.

Poppies flowering by the railway track 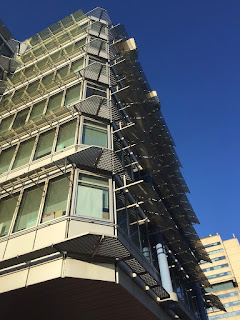 The Chartreuse cemetery is full of mini buildings that families have erected over the tombs of their loved ones. Some of them look as if the stone has been cleaned recently.

A young woman with an open smile serves me a glass of Montagne Saint-Émilion. She tells me it’s a good supple one to start with.

A handsome boy high on drugs wearing two different sneakers pesters a woman on the tram. He moves on to another woman and ruffles her son’s hair repeatedly. I wish she hadn’t let him do that.

Poppies flowering by the railway track, red dots in an urban mess of cables and graffiti.

Wobbly slabs underfoot as I walk across empty spaces between towering glass and concrete. 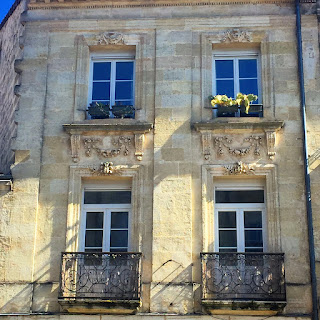 An up-high window-box on a honey-stone façade filled with cacti; the sort that look a bit like green Mickey-Mouse ears.

An old-fashioned marble counter in Cadiot-Badie, a venerable chocolate shop on the Allées de Tourny.  The young woman who served me was wearing yellow-gold eye-shadow.

A glimpse of long black hair as the woman sitting behind me on the tram told her friend back home in Marseille that she was really quite happy, it was just that nothing had happened in her life yet. Her not-from-here accent rang out like a fog-horn.

“Boats on the Shore”, a painting by Joan Eardley. Someone tweeted it earlier today and even on my phone screen I loved it: vivid boat colours streaked across the bottom left-hand corner, the rest a dullish green sea.

A woman at the tram stop with a tote bag that declared “J’ai donné/ du sang / et vous?” I can’t remember if those were the exact words, but the middle line was red and diagonal, with the whole thing giving off a bit of that seventies aesthetic that’s popular. They don’t want my blood because I lived in the UK during those very seventies. Prions, you see.

My daughter’s smudged mascara. A bad mark when you’ve worked hard is difficult to accept.

And so you're back from outer space 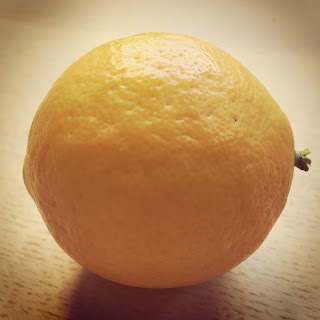