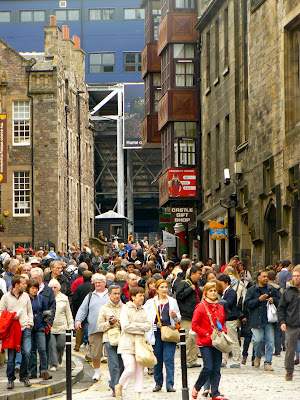 Well I suppose that must be summer nearly over. It's been a good one, apart from a couple of minor mishaps like LOSING MY FLIPPING PASSPORT just before a flight to London. I was heading off to a conference at Saint Mary and the bloody thing (GB passports are the colour of blood, have you noticed?) just disappeared into thin air — pouf! I ended up missing my flight, getting an emergency passport from the nice ladies at the consulate and buying a replacement Easyjet ticket. The conference was worth it though -two days of stimulating talk on the subject of the literary essay from some very clever people. Unfortunately I had to leave just before the end and missed the speaker I most wanted to see, Geoff Dyer. I love Geoff Dyer's writing and if you've never read any of his books, you really should.

The upside of losing my passport was that I then found myself stuck in Edinburgh for a week while E had her course of total immersion in English a.k.a. being spoilt rotten by Grandma. The stay in Edinburgh gave me a chance to do some work in the National Library and, even better, to catch up with old and new friends.

This was a stay I hadn't budgeted for so I stayed in the cheapest place possible - the student residence at Pollock Halls. If you're not too bothered about fancy sheets and chocolates on your pillow, you can't really do much better than Pollock Halls. For a start it's only £28 a night and that includes a massive breakfast - square sausage, black pudding, potato scones, the lot. And then ... well that's it really. You're near city centre and you're right next to Arthur's Seat but it's still a student residence with single beds, shared bathrooms, carpets that have probably been vomited on by countless generations of students, and the lonely studenty feeling of waiting for something better to happen.

That Edinburgh studenty feeling was conjured up again, later in the summer, by the novel One Day which you have no doubt read since I saw it in the hands of at least a dozen people I crossed over with during the summer. (Has anyone seen the film yet?) The passport debâcle turned out to be book-related too - almost as soon as we landed in Edinburgh, I found it in my luggage. I had apparently been using it as a bookmark in a tedious book I had reluctantly brought along to review. Gah.
at August 29, 2011 4 comments: