I've been reading Freakonomics and am fascinated by the chapter on cheating among Chicago schoolteachers who, it seems, have had a tendency in the past to correct their pupils wrong answers before sending their tests in to the exam board. The idea of teacher fraud was new to me, but I'm familiar with that of rampant student cheating.

In fact, anyone who has spent any time in a French university knows that students here generally* have a completely different attitude to cheating in exams to anything one might have come across at one's alma mater. Over the years, I've had many discussions about this with my students and it seems impossible to communicate satisfactorily to them the stigma associated with cheating in universities in the English-speaking world. They laugh and argue that cheating is simply a game played out knowingly between examinee and examiner; that passing notes during an exam is a sign of "student solidarity"; that cribs (antisèches) are legitimate reference tools; and that only losers don't at least try to cheat. It makes exam invigilation a tiresome game of cat and mouse.

So we all agree that cheating is bad and certainly not at all comparable to telling tiny fibs through omission to the telephone people in order to secure a new phone. Good, I'm glad we got that straight.

*I'm not suggesting, of course, that every single student in France cheats all of the time. Many students are scrupulously honest.
at September 22, 2008 10 comments:

Pride comes before having to plunge your hand down the toilet

We hadn't been together for very long but he had already become an important part of my life. In fact I depended on him for a lot of things, perhaps too many things. He knew so much, was open to the world and kept me informed of all the latest news, encouraged me to keep in touch with my friends and family, played me beautiful music, kept me constant entertaining company. It got to be that I just couldn't get through the day without consulting him at regular intervals. At night, he was a comforting sleek black presence as he slept beside me. I had shown him off to all of my friends and colleagues and bored my on-line friends silly with talk of his beauty and performance. And then suddenly I felt him slipping away............. slipping away down the toilet as he dropped out of my pocket and into the yellow water.
Bye bye darling iPhone. It was lovely knowing you — and if you want to miraculously come back to life, I'll be here waiting for you.
at September 09, 2008 22 comments:

Recently, whilst engaged in some pleasant pursuit my enjoyment has sometimes been curtailed by the sudden thought that this activity is almost certainly the subject of a post on Stuff White People Like. As you probably know the title of that blog is misleading - it's not so much about what white people per se like, but about what reasonably well-educated, middle class, middle-aged people who like to think of themselves as socially aware (ie. me) think they should like. In some ways the title of the French equivalent is better - it's called Trucs de Bobo (a bobo being a bourgeois bohemian).

Viz my trip with the children yesterday morning to the market at Saint Michel. There are several markets in and around Bordeaux during the week, notably a rather contrived one on the quayside on a Sunday morning which attracts well-heeled city-dwellers out with their baskets and their poodles for a little local colour. (Rumour has it that the mayor Alain Juppé often has his driver drop him off just round the corner where he unloads his bike from the boot then cycles around the market stopping to shake the occasional hand and make some token purchase.) The market at Saint Michel is nothing like that - it's big and authentic and full of pungent smells and shouting and people pushing and shoving.

Yesterday we made our way through crowds of cash-strapped people doing their weekly fruit and veg shop; women buying vast quantities of pastries in preparation for feasts at sundown (it's Ramadam remember), past tables piled high with mint and coriander and barbary figs, others with many bolts of either very sparkly or very dowdy material; stalls that specialise in Spanish cheeses, hams and chorizo; young men in robes collecting money to build a new mosque; Halal butchers and African spice merchants.

It's all hugely enjoyable and dépaysant, a bit like a trip across the Mediterranean but only a stone's throw from home, and the produce is cheap to boot. Just the sort of thing we bobos go mad for.

But if there's one thing we bobos know how to do well, it's decorticate our own smug little predilections and laugh at them, n'est-ce pas?
at September 07, 2008 4 comments:

Is this thing on? 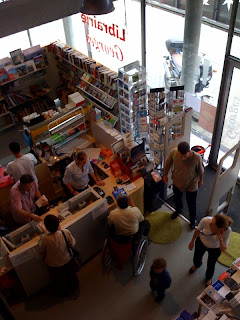 Shopping for a dictionary at our local bookshop and wondering if this e-mail malarkey actually works. White people like to shop locally of course - more on that later.
at September 06, 2008 4 comments:

I think I can feel a pulse!

Maybe it's time to resuscitate this blog - two posts in three months is a little shabby.

Where on earth did all that time go? I've been looking back at my twitters for those three months to refresh my memory and it seems that:
I took the children on a camping trip to Lacanau and discovered that I the ground is a hard place when you sleep on it.
I did a few interpreting jobs - one of them in a beautiful château in Sauternes, another in a recycling plant, one with Palestinians and Israelis, one with psychomocologists.
I went to Scotland twice - first to take Z for his first solo stay at Grandma's then for a two-week holiday with the rest of the family.
I spent two rainy weeks in the Dordogne.
I volunteered to create two web sites (before realising that I didn't know how to do that so resorted to making two blogs but cunningly disguised them as web sites).
I lusted and obsessed over an iPhone and finally got one in August.
And I took a few photos.