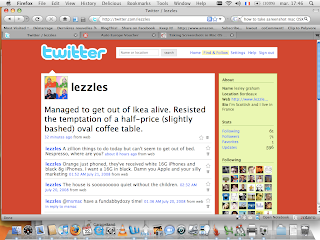 I'd just got back from Ikea and I'd unloaded 120€-worth of things we don't really need from the back of the car:
I'm an overwrought working mama so as I twittered I was simultaneously juggling some other tasks:
(This post is an entry in the FuelMyBlog /Tsheets 5:10p.m. competition. Guess what the prize is.)
at July 22, 2008 3 comments:

The Kindness of Strangers

Well, I made it to Bergamo and back .... but only just. Things actually went very smoothly on the way there: car, plane, bus, train, and then a long walk up a hill in viscous heat past a bicycle race. The journey back was a different matter.
The receptionist at the hotel gave me the wrong bus times and numbers and I didn't check her information, so I ended up on the wrong bus. I didn't realise this until we had wasted over an hour chugging through and around Bergamo; had sailed past the airport and were well out into the middle of absolutely nowhere, and this with only forty minutes left until my plane took off. The bus driver looked sympathetic, said no he was not going back towards the airport, no there was nowhere to get a taxi around here, shrugged his shoulders and smiled. I felt sweat trickle down my back and contemplated collapsing on the floor of the bus and crying. In the end, I shouted at the driver to stop the bus and let me off. He screeched to a stop and I stumbled off with my enormous bag.
The only person around was a man carrying vegetables into a grocer's shop so I rushed up to him and explained my predicament using my ten words of Italian, stabbing gestures at my watch and copious repetitions of urgentissimo, urgentissimo! As he confirmed that there were no taxis in the immediate vicinity, he gestured to me to follow him into the shop. Inside, he had a conversation with an older man about, well at the time it seemed to me to be about mozarella, but I now think they were deciding which of them should run me to the airport in the van.
I got there just in the nick of time and just a few hours later was picking the children up from the school gate where I fought the urge to tell all the bored looking parents what an adventure I'd just had in Italy while they were all going about their normal business.
Anyway, thank you kind Italians. I will never see you again since I would never be able to find your grocery store again but you really did rescue me from a horrible situation, and you didn't hesitate for one second. I owe a hapless stranger a big favour.
at July 07, 2008 8 comments: