This was the first dull day we'd had and P. and I went into Périgueux to buy a few things at Leclerc - notably mugs. Drinking coffee out of bowls for a few days is all very well but after a couple of weeks the novelty value wears off.

This is me working on a 19th C book for an upcoming conference. 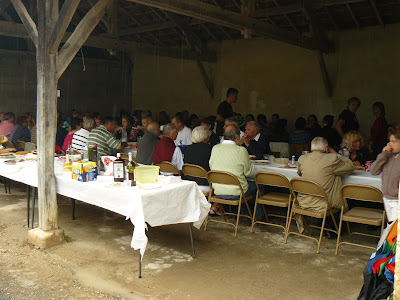 This was my last full day in the Dordogne - the day of the village méchoui. Usually this big sheep roast takes place in an idyllic spot beside the river Isle, but this year it was raining so we all crowded into the old school yard.

And tomorrow (well, later today actually) we're off to Scotland for further adventures.

I'm going to try to keep the 16.16 photo thing up for a bit longer but I'm moving it over to my tumblr blog Desultory Notes which I've really only used as an intermittent link dump until now.
at August 14, 2009 1 comment:

On day 10, we were waiting for P's four aunts to arrive for crèpes and drinks on the terrasse. E. had put on her best skirt.

These are P's golfing shoes. We'd been to the Domaine de Essendiéras in the morning and he'd done a bit of putting while E had a riding lesson. Most of the kids on the domaine are Dutch and E was the only French-speaker at the lesson but that didn't seem to phase her at all.

Here we are visiting our friend Dominique and his family at their absolutely gorgeous village of stone gîtes, Le Hameau du Sentier des Sources, not far from Sarlat. We'd just had a delicious lunch of cou d'oie farci, which sounds a lot better in French than in English. All of the other photos really were taken at exactly 16.16 but this one was taken a little later because I was actually swimming up and down that pool at the allotted time.

This is Zac in the garden of a little house that his grandparents rent out in Jaillac. We were there to take better photographs for the new, improved website that I'm trying to make them (link later).
at August 14, 2009 3 comments:

This is day 6 and we're visiting one of P's sisters on the campsite that she and her in-laws own and run, Le Camping du Lac in Plazac. The children are spoilt for choice because there's a lake and a swimming pool to jump into. Decisions, decisions. I took this picture from a horizontal position, again.

We stopped in Corgnac to reserve places on the Vélorail for a couple of days later.

E and another aunt on their way up the hill to Château de Laxion. They were probably talking about the car crash we'd just witnessed on the road in. Actually the children only heard the massive bang of it, then P and I ran down the hill to see if any help was needed. Thankfully it wasn't, although there was a little boy in the back of one of the cars who rented the air with his screams of fright. The Château itself was interestingly delapidated and everybody enjoyed the medieval show.

On day 9, we were in Brive visiting my friend Célia and we hadn't quite finished lunch. I was Célia's witness at her wedding in 1987 - the children didn't recognise me in the photograph she'd dug out. Probably because I looked like a poodle.
Célia's son Alex gave Z an electric guitar and made him the happiest 8-year-old boy in the world.

By day 2 we had cracked out the barbecue and the Macbook.

Day 3 saw us at the Repetto factory shop then Le Jardin d'Hélys an outdoor/indoor art fantasy where I took the Into the Wildesque photo above.

Another day another barbecue.

On our way to the outdoor municipal pool in Excideuil.
at August 11, 2009 4 comments:

16.16 #1, originally uploaded by Lezzles.
When we went to the Dordogne on holiday, I decided tht I would take a photograph every day at exactly 16H16 and post it to this blog. I stole this idea lock, stock and barrel from my friend Sarah who has been taking a photograph at 11H47 and posting them to her photo blog Eleven47 every day for years.

Unfortunately, it turned out that the Edge connection in our part of the Dordogne was just to weak for me to post anything more complicated than a tweet so I've saved them all up and I'll give them to you in instalments.

This first photograph is of the terrasse on one side of the house. We're lucky enough to be able to use the house next door to P's parents every summer so we're independent but close enough to eat together and the children can wander from one house to the other depending on where there's an open pot of Nutella. The house has this big terrasse which is actually the roof of the garage below, where we eat and watch the village go by - usually to the communal bins which are just across the road. I tend to spend a lot of time reading horizontally on the swing seat.