My Own Love Song (2010)
It's difficult to understand how a film starring Renée Zellweger and Forest Whitaker, with a decent storyline and some fantastic Louisiana landscapes ended up as such a messy dog's dinner, but it did. (Forest Whitaker plays a character reminiscent of Lennie in Of Mice and Men, or Benny in Crossroads, depending on your frame of reference).

Bend It Like Beckham (2002)
I thought this would be the perfect film to keep both children happy since it combines sport for the boy and some chaste kissing for the girl. Neither of them liked it very much though. I thought it was all right.

Invictus (2009)
I'd seen this before and Z has watched it at least ten times. Still holding up.

The Last Song (2010)
My daughter E loved this Miley Cyrus film. She's eight and that's the age you'd have to be to get anything out of it I suspect.

Martian Child (2007)
We all really enjoyed this story of a child who thinks he's from Mars and the man (John Cusak) who adopts him.

Last Night (2010)
A film about sexual and emotional fidelity / infidelity. Keira Knightley and Guillaume Canet aren't too shabby in it. The real star for me though was the wooden flooring in the NY apartment.

Neuilly sa mère! (2009)
This is the kids' favourite film at the moment. It's the story of a boy who moves from a cité to live with his rich relatives in the priviliged Paris suburb of Neuilly. His cousin is a big fan of the French president and some of the Sarko jokes are really quite good. Recommended.

Made in Dagenham (2010)
Saw this one in the cinema. Like Mad Men, it's one of those productions in which we get to laugh at how unenlightened we were in the '60s. And like so many of these enjoyable British social comedies with a message, the message is so diluted that it doesn't come across with any force.

Inception (2010)
I bought the DVD for P for Christmas. We were both enormously disappointed with it - big budget nothingness.

Precious (2009)
Loved this film about being born to the most evil mother ever, being deprived of almost everything but turning out all right really. I liked Gabourey Sidibe in The Big C too.

I Love You Phillip Morris (2009)
I liked this one too, but Ewan MacGregor's American accent isn't up to much, is it?

De zeven van Daran, de strijd om Pareo Rots (2008)
Dutch film for kids. Apparently it's one in a projected series of seven. I won't be watching the others.

Once Upon a Time in America (1984)
I'd like to avoid the hackneyed term "epic tale" to describe this one but no other will do really. So, I enjoyed this epic tale of a group of friends who grow up together in New York. Not only had I never seen the film before, I had never even heard of it. Robert de Niro is great throughout.

Passengers (2008)
Strange film about the aftermath of a plane accident. Watchable.

The Merry Gentleman (2008)
Man invites village to his funeral but he isn't dead yet. I seem to remember that this was also the plotline of an episode of Little House on the Prairie.

This lot includes an advert for horse manure, some bluebells, a Japanese restaurant, a Kindle, some paperbacks, at least two bedrooms, and a few bottles of wine.
I did forget one day in this batch and I had to make do with an extra photo from the day before. That's another project buggered then I suppose, but I shall plough on regardless.

Last week, I had a drink with long-time blogger friend Ksam who was in Bordeaux on business. One of the things we talked about, on a balmy evening, was cultural differences in approaches to customer service. Basically, in most English-speaking countries the customer is always right whereas in France, the customer is very often a bothersome inconvenience.

The next day was a wonderful, hot sunny Saturday and I broke out a new pair of bright pink trousers that I'd bought in Zara about a month previously in preparation for the first days of summer. After the usual moment of mirror-mediated doubt (pink on those thighs, really?) and the grateful acceptance of totally-objective fashion advice from an eight-year-old ("t'es troooooop belle"), I noticed that one of the outside seams was completely wonky.

Unfortunately I couldn't find the receipt, but that's no problem with faulty goods is it? Off I set for Zara to exchange them for a pair without a seam hernia, anticipating apologies on their part and gracious acceptance on mine. Mistake! A manager who looked as if she hadn't eaten anything since 1998 stonewalled for a while, asked how she was to know I hadn't stolen the trousers; said they looked as if they had been worn; gave me a condescending lecture on how important it is to keep all receipts; grudgingly agreed to exchange them just this once as a gesture of goodwill; then flounced off with one last glare from her dead-fish eyes.

I can't stand the whining about France that fills many expat Twitter timelines, but I also think that when you've lived in another country for a long time, a sort of Stockholm syndrome sets in and you begin to accept the blatant failings of that country as quite acceptable, noble even. I'm going to have to get me some hostage assertiveness training.
at April 13, 2011 10 comments:

I've read my first book on the new Kindle: Joyce Carol Oates' A Widow's Story. About half way through this memoir — the story of JCO losing her husband in 2008 — I got a little bored. I could understand the relief that she got out of writing about her grief, the minutiae of insomnia, thoughts of suicide, and her impatience with thoughtless condoleance gifts, but I couldn't quite see what I was supposed to gain from reading about it. Actually it wasn't half-way through, it was exactly 64% into the book, you can tell those things on a Kindle.

Taking a break from the book, I remembered having seen photographs of JCO and her husband in the New Yorker a while ago and Googled to find them. As I typed the query into the box, Google auto-complete came up with "Joyce Carol Oates remarriage". Surely not?

But yes, here I was reading about and sympathising with the detail of the writer's apparently insurmountable grief at the loss of her partner of forty-five years, when in fact she was engaged to another man just eleven months after husband's death, and remarried shortly after that. She had moved on long before the book came out yet invited me to wallow in her unhappiness a little longer.

It seems to me that there is something profoundly dishonest about that; a betrayal almost. I ploughed (okay, clicked) my way through the rest of the book in a decidedly more critical sprit. The photographs had shown an emaciated cross between Sissy Spacek and Tim Burton's Alice, a face it was more difficult to warm to than facelessness. I grew impatient with her toying with the non-starter idea of suicide, and entertained a growing suspicion that this book was no more than a working up of the notes this prolific author had taken in the immediate aftermath of her husband's death along with some name-dropping e-mail exchanges.

Finally, but perhaps this is an American thing, it seems to me that it's a terrible mistake not to attend one's own husband's cremation.

If this was a real paper book, I would have listed it on BookMooch by now. But what do you do with an e-book you don't want?
at April 10, 2011 6 comments:

Kids here go to high school (or collège) early — Z will only be ten when he leaves the safe, comfortable environment of the primary school he's been at since he was just out of nappies.

Almost all of his bosom buddies will be going to the collège in our quartier, a short walk from our street. It's a nice school with just 440 pupils, and a friendly atmosphere. Another advantage is that they have a "section européenne" that specialises in German. So Z could just do German for the first two years and start English later; not a bad idea for a boy who's already pretty good at English.

Basically, we'd be quite happy for him to continue his education at the school for our catchment area and of course he's very keen to stay with his pals, to perfect his mucking-about-in-the-playground skills. However, there is another possibility.

A ten-minute walk in the opposite direction from our house takes you to another, much bigger collège with 900 pupils. This one has a very special international programme just for bilingual children and families come from hundreds of kilometres away to get into it. There's a written and spoken English test to get into the class and the children that do get in are worked hard with extra classes in English language and literature. History is taught in English too. It's a small, tight-knit class and a very enthusiastic American teacher gives them lots of personal attention and encourages high achievement.

Is this the right environment for Z ? Could he take the extra pressure? Is he "academic" enough? Is his English good enough to pass the test (mea culpa, mea maxima culpa)? I think that if we can get him on our side on this, he might thrive. But then I think he'll also thrive in the regular collège.

This is a first-world, middle-class dilemma, I'm keenly aware of that. We're wonderfully lucky to live in a country that still believes in a public education system in which we have the luxury of choosing between two perfectly good options. But God, I hate making decisions, and I hate contemplating pushing our wee boy out of his (and our) comfort zone and into what might turn out to be a bit of a hot-house.

(PS. If you read French, Caroline had a really funny post the other day about the social politics of choosing a collège, even for those who don't have to deal with the language question)
at April 04, 2011 8 comments:

Tips for giving a good lecture 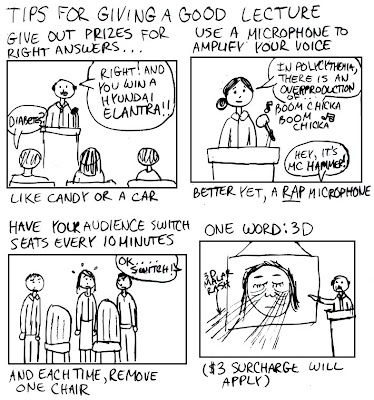 3D! Why didn't I think of that? If only I'd seen this before those lectures in February.
(From A Cartoon Guide to Becoming a Doctor)
at April 04, 2011 No comments: