Zoo Mosaic, originally uploaded by Lezzles.
Ha. So Heather thinks that I deserve a thinking blogger award. [Insert self-deprecating but nevertheless sincere remark here. Perhaps something unfavourably comparing own level of cogitation to that of the big gorilla guy photographed above, which would at least justify presence of a mosaic of yesterday's zoo photos in an otherwise completely unrelated post.]

I believe that I now get to make my own nominations. 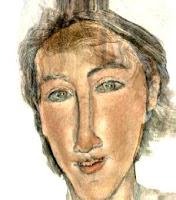 I spent far too much of yesterday obsessively searching for a half-remembered quote from a book (but which book?) on the subject of April 23rd.

My garbled memory of the passage tells me that April 23rd is not only Saint George's day but also Shakespeare's birthday and Dantes' birthday (or perhaps deathday). For this reason, in some countries (which countries?) the date is associated with literature and it is traditional to give the gift of a book on this day (but to whom?).

I didn't give any bookish presents yesterday but I did join BookMooch which I'd been meaning to do ever since Heather told me about it.

While I was fruitlessly skimming though books looking for the elusive passage (I could clearly visualise it three-quarters of the way down a right-hand page), I came across this much more interesting paragraph about the difference between expatriates and foreigners. I've never liked the term ex-pat and in fact I hadn't ever heard it bandied about much until I started reading so-called ex-pat blogs. Alasdair Reid explains what the word means to him in Whereabouts: Notes on being a Foreigner, a book I mentioned in my last post.

[Expatriates] have left their own countries on a long lead, never quite severing the link with home, never quite adapting themselves to their exile, clinging to one another for company, haunting post-offices, magazine stands, and banks, waiting expectantly for money from home, anything at all from home. Expatriates are generally getting their own countries into perspective, to the point where they feel strong enough, or desperate enough, to return to them. Foreigners, conversely, live where they are, leaving their pasts and countries behind them for the place they take root in. In one sense, they are lucky: they are free to enter a new context unencumbered, with clear eyes, and are often able to savor a place in a way that escapes the inhabitants, for whom it has become habit. But however well a foreigner adapts himself to a place and its inhabitants, however agile he becomes in the lore and the language, there is a line he can never cross, a line of belonging. he will always lack a past and a childhood, which is really what is meant by roots.

The picture above which is me à la Modigliani (and yes, I have to agree, I look more alien than foreign) was created here. You too could see what you would look like if you were black/white/asian/a man/woman etc.
at April 24, 2007 5 comments:

Preserve us not from the list-makers

"Oh Lord, preserve us from the list-makers. And then preserve us from those who comment on the lists" says Judith Flanders. This didn't deter me from having a look at the results of a Waterstones survey in which the bookseller asked its staff to name their favourite five books written since 1982 — the date Waterstones opened its first branch. I liked a lot of the books on the list: The Curious Incident of the Dog in the Nightime, The Shipping News, The Poisonwood Bible, The God of Small Things, The Crow Road, Snow Falling on Cedars, Love in the Time of Cholera. Some I thought were tripe: Chocolat, Birdsong, Notes on a Scandal, The Da Vinci Code.

It would seem that I have a penchant for travel books with one-word titles by Scots, preferably called Ala/isd/tair. What about you?
at April 21, 2007 8 comments:

Email ThisBlogThis!Share to TwitterShare to FacebookShare to Pinterest
Labels: books

Soulac is one of those old-fashioned seaside towns that you still come across in France. It's about an hour north of Bordeaux and you drive through the Médoc past prestigious châteaux to get there. Although it isn't nearly as chic and fashionable as places like Arcachon and Cap Ferret, there's something about the atmosphere that makes you feel relaxed: dilapidated villas that sit empty for most of the year, peeling woodwork, sandy gardens and weeds growing in the streets, moules-frites on the seafront, grandmothers in sunhats buying fish at the market, children with buckets and spades on the long sandy beach. If we had a rickety little villa there, I'd paint the shutters red.

"Where would you wish to go?" she asked.
"Anywhere, my dear." I replied.
"Anywhere's nowhere." said Miss Jellyby, stopping perversely.
"Let's go somewhere at any rate." said I.
Charles Dickens, Bleak House 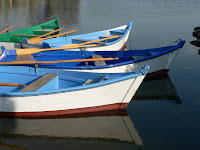 I wanted to go to the Alpujarras in Andalucia and had saved up A Parrot in the Pepper Tree, the last book in the Chris Stewart series that inspired this hankering. I had even found what looked like a lovely little white house with a pool and managed not to be too dismayed by the fact that all of the houses available for rent in the Alpujarras seemed to belong not to earthy Spaniards but to Brits offering massages and exotic cuisine.

As our departure approached, P. became less and less enthusiastic. "13 hours is a long time to spend in a car with two children. It's Easter week, the roads will be packed. The car's making a funny noise." "Don't be so negative", I said.

But when we looked at the weather forecast, even I had to agree that it was a very long way to drive for rain and mediocre temperatures. So we called the whole thing off and went to the Ile d'Oléron and the Dordogne instead.

And the car broke down on the way there.

Oh, and if you ever want to go to the Ile d'Oléron I have a recommendation for where not to stay.
at April 18, 2007 4 comments:

Email ThisBlogThis!Share to TwitterShare to FacebookShare to Pinterest
Labels: holidays

I've almost finished The Girls, a novel about conjoined craniopagus twins. It's one of the many books that my Mum brought me when she came for a short stay last week. She had discussed this one at her reading group and although she enjoyed it, she felt that some of the detail wasn't quite right. Take this passage for example:

Our mother grunted and pushed.
From anus. To clitoris. Her tissue tore.

"I was once a midwife," she told the group, "and that just isn't possible. Think about it."