The State of Me

In a very lopsided book swap, I ended up with a lovely new copy of Nasim Marie Jafry's The State of Me, and she got and old yellowed copy of Le Scaphandre et le Papillon.

I've been reading Nasim's blog for a while now, but I hadn't got round to reading her book. The State of Me tells the story of Helen Fleet, a young Scottish woman (like me!) who studies French at university (like me!) in the early eighties (like me!). Helen comes to France to do her year abroad (like me!) and develops ME (like Nasim herself).

You may (like me) be afraid of reading illness narratives because you suspect you are going to embark on an unhappy medical self-pity fest. Have no fear, there is no self-pity in The State of Me but there is lots of humour and lots of acute observation. Nasim writes in spare, measured sentences. The effort is contained and elegant as if the author had to calculate each word, the length of each paragraph before attempting it. The admirable style is underpinned by an indominitable sense of humour and an unfailing eye for the ridiculous. I smiled a lot, both at the wittiness and at the recognition of idiosyncratic places and practices in 80s Scotland. And there is romance too.

I obviously learned a lot about the illness ME, because although not exactly a non-believer, I simply didn't understand how debilitating it is or how much more complicated it is than simple chronic fatigue. The dialogues with the ignorant stranger were enlightening and perhaps they'll help me to be more sensitive and avoid trite comments next time I speak to someone with ME.
at July 30, 2010 1 comment:

All you have to do is paste in a blog post and hey presto. I'm sure I don't write like DFL - not enough footnotes for a start.

I Write Like by Mémoires, Mac journal software. Analyze your writing! 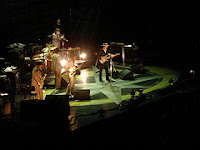 Last Tuesday I got to tick an item off my "things to do before I die" list. I saw Bob Dylan in concert.

I was exceptionally excited but there were several considerations dampening my enthusisam. First the heatwave: it was absolutely boiling hot outside and a bit like a steamy pit of writhing animals inside the Patinoire de Mérideck, especially in the standing area where we were. (Aside - remember that post about Charles Edward Stuart's daughter's lover the Archbishop of Bordeaux? Well, one of his names was Mériadeck). Then there was the fact that Z was still running a high temperature and that I'd had to take him to see the doctor at the end of the afternoon - but luckily we had enlisted the services of a responsible adult babysitter (in other words, one of our televisionless friends was interested in coming round to our house to watch a match). Finally, there was the fact that Bob Dylan's recent concerts haven't really had a great press. He is accused of perfunctory performances and a lack of engagement with his audience.
I needn't have feared - it was everything I had hoped for. It was loud and raw; a reminder of the power of his lyrics (although the acoustics at the Patinoire are appalling), and a chance to commune (honestly, it was a quasi-spiritual experience) with the voice. That voice. And all of its associations.

So it turns out that I'm not even very good at regular drivel. But I've actually been quite busy doing stuff n'at since the last time I drivelled here.

First I spent a day at arc en reve, Bordeaux's architecture centre, for an exhibition and a lecture by Bjark Ingals of BIG. Interesting.

Then there was E's eighth birthday. Eight's a good age, I think. She had her ears pierced. A couple of days before we had this done, that is after I had already promised that yes, now she was old enough to have holes in her ears, my friend Deborah told me that she thought it was a terrible thing to do. A bit like giving her a tattoo. What is the general feeling on this?

I wrote a paper and then went off to present it at a conference in Glasgow. I took that new direct Ryanair flight from Bordeaux to Edinburgh. It was on time but, my God, what a horrendous experience the new low-cost terminal at Bordeaux is. They've called it Billi. Basically it's an enormous cattle shed - a massive metal structure with no internal cladding and no air-conditioning when I was there. Passengers are basically herded into pens then left to stand for long periods. There were exactly three seats in our pen and you're probaby only allowed to use them if you've booked priority boarding and ten bags.

I stayed with friends in the West End. They like to eat out and we had some excellent meals. We had a great tapas style Indian meal at Mother India's Café on the Thursday evening - I love tapas and I love Indian food so this was doubly delicious especially the garlic mushroom pakora. On Saturday my Mum joined us for lunch at Fratelli Sarti - a Glasgow institution. And for lunch on Sunday we went to Chinatown for a mountain of dim sum. We were practically the only non-Chinese-looking people in a very busy restaurant - although when I tuned into the conversation at the neighbouring tables, the accents were mostly very Glaswegian with some Australian.

The weather was lovely in Scotland. Much more civilized than the 35°C we had here today.
at July 01, 2010 7 comments: