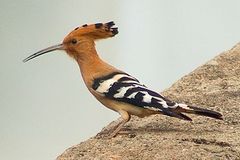 Back from a four-day weekend in the Landes. All in all it was a pretty mediocre break. The weather was disappointingly cool, the "villa" would have been better described as a hut, and two out of four family members were all drugged-up with antibiotics.

This morning though, as I sat outside on the terrace with a bowl of steaming coffee, I was joined by a pair of hoopoes working across the sandy patch in front of me. They looked oddly overdressed, a little Egyptian perhaps. The mother did all of the hard work, digging up grubs with her long spiky beak and then passing them on to an incompetent youngster, throwing up fountains of sand in the process.

Now it's back to our own town garden and the same young blackbird we left flailing around at grass-level on Thursday. Still not very good at getting off the ground, still a constant source of worry for his musical mother and still a sitting target for the neighbourhood cats.
at May 28, 2006

What a great looking bird!

Sounds like the weekend ended well, at least. And a break is a break!

these hoopoes are so incredibly tropical somehow, whenever I catch a glimpse of one I am pleased, it is just as good as a shot of heroin (except have never tried that)
Why is it that seeing a heron flying overhead or a greater spotted woodpecker searching for ants gives one such a kick?
I'm trying to think of other things apart from birds that make the blood rush to my head (apart from men of course)
rainbows maybe, trees in flower, or finding a clue to a crossword, as long as have a glass of wine in hand at the same time ....

Yes, hoopoes are great birds. Unfortunately only rare vagrants to Scotland. Funny thing though, they are such good looking birds but their nests are absolutely disgusting. Usually in a hole in a tree, the parents don't remove faeces etc and it just accumulates into a festering, stinking pit out of which these beautifull birds emerge.
Just thought I'd share that !

Sluts! (actually sounds like my ideal kind of housekeeping)