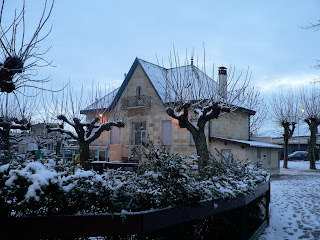 We have taken the children to the park to run off all of that pent up energy. Our local post office is situated in the middle of the park.

An elderly woman — old but not that old — studies the notice on the door. She is well dressed but her face wears a fixed miserable expression. She asks me if I can tell her how to get to the main post office — this one is closed. I tell her that it's closed because it's the first of January and that the other one will be closed too.

She doesn't live far from here. It's just that she needs some money - will the other post office be open tomorrow? I say yes and explain in great detail how to get there - it's not difficult. She looks at me in an anguished, vacant way. Could I possibly go with her? Well, no not really. Could I write the directions down?

She fumbles in her near-empty handbag and finds a pen. I find a piece of paper and write the instructions down. She re-reads them several times and at the bottom of the page she adds that the objective is to go to the post office to get some money. She seems to know that she will have forgotten that part by tomorrow. She frowns, says again how lost she feels and explains that she hasn't had this maladie for long so she is still getting used to it.

She squeezes my arm. "Merci de votre gentillesse" she says. Somehow, I don't feel at all kind.
at January 05, 2010

Forgot to add that although that is a photo of our local post office, it's one I made earlier (2007) - we haven't had any snow yet this year.

This is a gorgeous microstory though very sad, I had a lump in my throat...plenty of snow here , you are welcome to shovel some over to France!

Our kindness never seems enough, does it, when there's so much need. This story gets really close to home, for me, as my mother grapples me with impaired cognition due to age, and she fears becoming less able to function. At least the woman you met is still able to ask for help and is still met with warmth and helpfulness by strangers such as yourself.

nmj: I should have waited just one more day - now it looks exactly as it does in the photo.

materfamilias: Concern about others is never altruistic but wrapped up in worries about how we might end up ourselves.

ooh scarey. My husband's greatest fear is ending up in the old age foyer in our local village, being forced to listen to endless accordion music with no English tele. Now we have been to see AVATAR we are less worried. We'll just climb into that little coffin thing and live life through some one else's body...

Your post captures the close-distance we feel at the plight of others.

This looks like the Post Office in a park not far from rue Judaique, I better look at the map.

In case you couldn't decipher my error -- I meant to say "my mother grapples with cognitive impairment" -- the typo is revealing in a Freudian way . . .

A frisson of fear goes through all of us above a certain age when witnessing, directly or vicariously, degeneration near the end. May we all be lucky in our Samaritans!