Fun and Games at the Opera 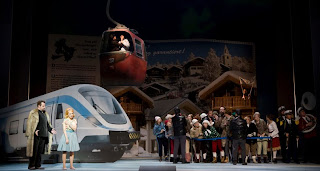 This could have been a nice cosy post about how much Z and I enjoyed the Opéra de Bordeaux's unusual production of the Magic Flute last night. It takes place in a ski resort with lots of kitchy decor and sixties style hairdos and anoraks. Great fun.

However, Z was going with a group from his music school and I had to make him a picnic dinner to eat on the bus. While I was sticking the ham in his sandwich, with only twenty minutes to go before we had to leave, I got a phone call to say that there was an extra ticket and would I like to go? Yes!

P. works late on a Thursday though, so I would have to ask our friendly young neighbors if they would look after E until he got home. "I'm just going to run next door and ask them" I said to the children. They followed me out and Z pulled the door behind him and aaaaaaaaaaaaaaaaarggh locked us all outside.

And that is how Z's first visit to the opera involved some muted shouting, a borrowed car, no dinner, no coats, and no money.

This has made my day!

So at least you know you have a burglar-proof home!;-) -- I have all kinds of windows, and I'm always fairly sure I could wiggle one of them open and crawl through.

I wonder if it might be true that there are more "unusual productions" of MF than of any other opera -- its beautiful weirdness seems to lend itself to such play, do you think?

Most excellent! I owe my union card to Julie Taymor's Zauberflote at the Met. Love the music. Any excuse for the Opera is a good one,.

When you go to thank the neighbor for looking after E, maybe drop off a spare key, for next time?

Materfamilias: We had prepared for the outing by watching excerpts from a very straight version - we both far preferred the funkiness of this one.

Beefking: That's exactly what the neightbour said. Our cleaning lady does have a key but her phone number is in my iphone and my iphone was locked in the house...